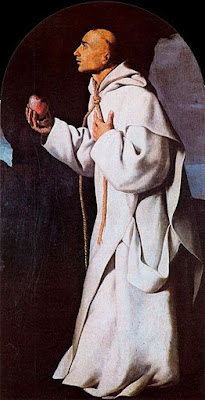 In July, we had a cluster of English Catholic martyrs at the end of the month. The anniversaries of Supremacy, Recusant, and Popish Plot martyrs are spread throughout August, with some unique stories (the Feltons, father and son; St. John Kemble's pipe; a martyr who had witnessed another priest's martyrdom (NOT Walpole and Campion); etc). Today's beatified martyr and his companions represent, in a way, some tidying up in the last years of Henry VIII's reign: the last Carthusian, the last Carmelite, and one more connection to Thomas More.

From my research, I don't think anyone knows why Blessed William Horne survived all his Carthusian brothers until August 4, 1540, but for some reason he was kept alive while the others starved to death. Refusing to abandon his religious habit, he was not attainted till 1540, when he was hanged, disemboweled, and quartered at Tyburn on August 4, 1540 along with five other Catholics: the two laymen Robert Bird and Giles Heron, Friar Lawrence Cook, Carmelite Prior of Doncaster, the Benedictine monk, Dom Thomas Epson, and (probably) the secular priest William Bird, Rector of Fittleton and Vicar of Bradford, Wiltshire. Blessed William Horne must have been inspired by the memory of St. John Houghton, to remain so true. As David Knowles wrote of Houghton in his book Saints and Scholars:  "In . . . John Houghton, the strict monastic life brought to blossom for the last time on English soil a character of the rarest strength and beauty--a last flowering, a winter rose, of English medieval monachism. . . . the picture that emerges is of a man capable not only of inspiring devoted attachment, but of forming in others a calm judgment and a heroic constancy equal to his own." Loving Jesus, remaining true to his vows, Horne was faithful to his master's pattern of life and death. More about the Carthusian martyrs here (well-illustrated!)

His companions are also interesting: the Carmelite friar represented the last of his order in Henry VIII's England. Thirty-six Carmelite monasteries in England were destroyed or sold to private owners; and a score of others in Scotland and Ireland. In 1539 the famous Carmelite library in London suffered a similar fate. Friar Cook had supported the Pilgrimage of Grace and had been kept in Beauchamp Tower--where Blessed Thomas Abell had also been held in great destitution for almost seven years before his execution--for two years after his arrest in 1538. The last active friar of the Carmelite order, George Rayner, died "in chains" during Elizabeth I's reign--what must it have been like to be the last? The last Carthusian, having seen his fellows starve and die; the last Carmelite, having seen his order destroyed in his own country? 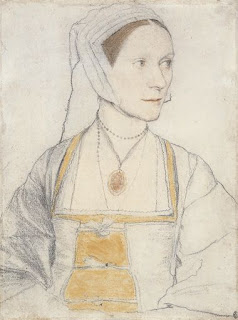 With Giles Heron, we have a connection to St. Thomas More; he was one of More's wards and married More's daughter Cecily:

Giles Heron’s father had served both Henry VII and Henry VIII as treasurer of the chamber. He was still a minor at his father’s death and in March 1523 his wardship was granted to Sir Thomas More, then under treasurer of the Exchequer. In July 1525 he obtained livery of an inheritance in south-eastern England, his chief residence being at Hackney: shortly afterwards he and William Dauntesey, the son of another royal official, each married one of More’s daughters.

There are only occasional references to Heron in More’s letters, and he was probably not so close to his father-in-law as was William Roper; when More was chancellor Heron is said to have refused a settlement in a chancery case, hoping for a favourable decision, only to have More finally make a ‘flat decree against him’. Yet there is no reason to regard Heron as unsympathetic to More’s ideals: his fate indeed implies the contrary. It was doubtless More who, as chancellor of the duchy of Lancaster, secured the election of both Heron and Dauntesey for Thetford in 1529, the first Parliament to which that borough is known to have returned, although they must also have enjoyed the support of the 3rd Duke of Norfolk, himself a duchy official and the patron of William Roper at Bramber. Nothing is known of Heron’s role in the Commons. Cromwell did not include him with Dauntesey, Roper and two others of the More circle (all three bracketed as ‘of Chelsea’) on a list compiled in the spring of 1533 and thought to be of Members opposed to the bill in restraint of appeals. On the contrary, what little is known of Heron’s career outside Parliament at this time suggests that he remained in royal favour: in 1532 he sold his messuage of Alderbrook in Wanstead, Essex, to the King and in the same year, as an esquire of the body, he and three of his brothers were pardoned offences against the forest laws. He was presumably returned again to the Parliament of 1536, in accordance with the King’s request for the re-election of the previous Members, and he was on the Middlesex grand jury which found a true bill against Anne Boleyn; for the next three years, however, nothing is known of his activities.

Heron had been involved in a number of disputes over lands and with his tenants, dependants and relatives, including one with his brother Christopher and another with Robert Dormer over lands which had belonged to Heron’s brother-in-law John Dynham. When recording Heron’s sale of Rycote in Oxfordshire to Sir John Williams, Leland was to describe him as ‘wise in words, but foolish in deeds’; the sale was confirmed by a private Act (31 Hen. VIII, c.19). It was a dispute with a tenant, one Lyons, whom Heron had expelled from his farm, which led to his downfall. In 1539 Lyons, seeking revenge, appears to have informed Cromwell of certain treasonable words or deeds attributed to Heron and to have tried to get others to confirm them. In February of that year Heron had to find three recognizances of 500 marks each for his appearance before the Council when called to answer charges: at this time he can hardly have been suspected of treason but in May he was ‘in trouble’ in the Fleet and in July he was sent to the Tower as a suspected traitor. Cromwell’s memoranda include a number of references to Heron and from these it appears that Lyons was the only witness against him. It was perhaps because he could not easily have secured a conviction on this evidence that Cromwell had a bill of attainder introduced into the Lords on 3 May 1540 which passed through all its stages in both Houses in six days (32 Hen. VIII, c.58). The minister’s own fall delayed the execution until Aug. 1540, when Heron was hanged at Tyburn.

Lyons’s malice did not stop there, for it was at his instance that in the month following Heron’s death three of his brothers were examined by the Council with regard to their share in his treason: all were found innocent and were dismissed. Two of them, Christopher and John, were servants of (Sir) Ralph Sadler, a neighbour of the Herons to whom Giles Heron’s schoolboy sons had appealed for help during their father’s imprisonment. In July 1554 Queen Mary restored to Thomas Heron, the elder of these sons, part of his father’s lands.

Blessed William Horne was included with the other Carthusians to be beatified, but the others executed on August 4, 1540 have been passed over for some reason. The Center for Thomas More Studies notes that Giles and Cecily had three children, but does not have a date for her death. She lost both her father and her husband to charges of treason. She suffered greatly for the faith, too.
Posted by Stephanie A. Mann at 12:30 AM