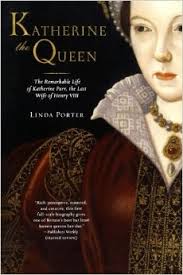 Henry VIII's sixth wife and surviving widow, Catherine Parr, died on September 5, 1548. One of her biographers, Linda Porter, discusses the relationship between the monarch and his last wife for History Today:

It was noted that “the king espoused the queen privately and without ceremony”. The bridegroom was, however, enthusiastic as he took his vows “with a joyful countenance”. Henry was 52 years old and ailing. His new wife, Katherine Parr, was not quite 31, twice-widowed and an experienced stepmother. Surely this was a marriage born of common sense, where passion would play little part? The Victorians depicted it as the union of an irascible tyrant with a worthy matron. The truth, however, was very different.

Henry was looking for a wife, not a nurse or homemaker. He wanted a companion for his bed who might provide further heirs and could carry the role of queen consort impressively. Katherine, who had given up another man to marry the king, was well aware that her duties would definitely run to more than polite conversation and soothing the royal brow. Her determination to be a success led to a deep bond of affection between the royal couple which may, in 1546, have saved her life.

It is not surprising that Henry was drawn to the comely widow. She was a slim, attractive redhead whose unimpeachable reputation hid a sensual nature. Her other suitor, Sir Thomas Seymour (the king’s brother-in-law), had already realised this and probably Henry did, too.

Until now, the curtains around the marriage bed of Henry VIII and his last wife have remained firmly closed. Yet theirs was undoubtedly a sexual relationship. Katherine took seriously her vows to be “bonaire and buxom in bed and in board”. She took milk baths to keep her skin soft and the day after her wedding, she ordered “fine perfumes” for her bedchamber at Hampton Court. She was clearly determined to make her body and her bedchamber as enticing as possible.

Henry lumbering into view in his nightshirt must have been a daunting sight. A year before his final marriage it had been noted that he was “already very stout and daily growing heavier… three of the biggest men to be found could get inside his doublet”. Pain and the disease in his legs had left their mark on him. Between 1543 and 1545 he got through 300 pairs of hose a year. This was the man that Katherine had taken as her third husband. Very soon he doted on her – but could she possibly have loved him?

At the outset, almost certainly not. She married him for the advancement of her family and because he could not be refused. She was dutiful and keen to convince herself that her fate was God’s will. Yet Katherine was also a loving and optimistic woman, as well as intelligent. She knew the opportunity that had come her way and thought hard about how to turn it to her advantage.

Developing a good relationship with all three of the royal children was certainly important but at the heart of Katherine’s strategy was the king himself. Henry was not simply an overweight monster but a lonely and unhappy man after the disaster of his marriage to the foolish Katherine Howard. Katherine Parr recognised his need for love and attention. Circumstances permitted her to establish herself swiftly as a major influence in his life, as the plague kept them continuously outside the capital and in each other’s company for six months. It was an ideal foundation for their relationship. So the king showered her with jewels and beautiful clothes, entrusted the country to her regency while he fought the French one last time in 1544, and greatly hoped for children with her.

Porter might be ascribing a thought and decision-making process that we can't verify, but it does comport with Katherine's actions in reaching out to Mary and Elizabeth and mothering Edward.

Henry and Katherine shared many interests, from hunting and archery to music, masques and books. She was a graceful dancer and they both loved the Venetian Bassano brothers, musicians patronised by Katherine. Henry, a cultured man, was delighted to have a queen who commanded respect from ambassadors and with whom he could discourse. Both husband and wife were committed to the 16th-century belief in lifelong learning. Katherine brushed up her Latin and also began to edit and write religious books, as her commitment to advancing the cause of further reform grew. In 1545 she became the first queen of England to be published when copies of her Prayers or Meditations were produced by the king’s printers. Her influence over Henry seemed unshakeable.

Porter then goes on to describe the crisis in this marriage and its source: religious controversy in England between Catholics and Evangelicals. Read the rest there. 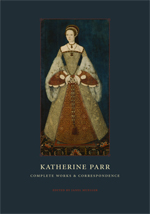 It seems that William P. Haugaard's 1969 article in the Renaissance Quarterly published by the University of Chicago Press, "Katherine Parr: The Religious Convictions of a Renaissance Queen" is one of the main resources for our understanding of Parr's religious beliefs and influences. I do find it fascinating that Katherine Parr's first published translation in 1544--while Henry was in France and she was Regent--was of Bishop John Fisher's Psalmi seu Precationes when Henry VIII had beheaded the holy bishop just nine years earlier. While Haugaard does not mention Fisher as the original author of the Psalms or Prayers in Latin, he does note that the private, devotional nature of the work meant it would not offend a Catholic, Lutheran, or Calvinist, and that it was popular, being reprinted during the reigns of Edward VI, Mary I, and Elizabeth I! The University of Chicago Press published Katherine Parr: Complete Works and Correspondence, edited by Janel Mueller in 2011, which includes the Psalms or Prayers and The Lamentation of a Sinner, Parr's more obviously Protestant work.

Katherine Parr, married four times and widowed three, died after bearing her first and only child, Mary. Linda Porter discussed the fate of that orphaned baby (after Parr's fourth husband, Thomas Seymour died) also in the virtual pages of History Today.
Posted by Stephanie A. Mann at 12:30 AM