June 24: The Puritan and The Jesuit 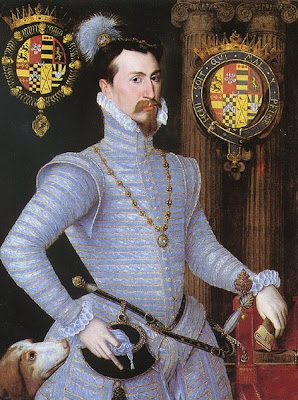 These two men shared the same birthday, the same first name, and the same generation, but little else--except for the general atmosphere of danger in Tudor England.

As a young man, Dudley experienced the dangers of the Tudor dynasty. His father was John Dudley, the Duke of Northumberland who encouraged Edward VI to change the succession from Mary OR Elizabeth Tudor to Jane Grey Dudley. His brother was Guildford Dudley who had married Jane Grey. Robert Dudley was imprisoned in the Tower of London after Mary I thwarted that attempt. Although he and another brother were released, his father, brother, and sister-in-law would all be executed for their role in the attempted coup d'etat. Dudley owed his safety to Philip II!

Robert Dudley became one of Elizabeth I's favorites. Between wives, it seemed at some point they might marry, except that the first wife died (Amy Robsart) in such suspicious circumstances. Dudley--or Leicester, as he should be called after his title--was a devout evangelical, a patron of Puritans, who encouraged Elizabeth to join in the war in the Spanish Netherlands between the Protestants and the Catholics there.

Elizabeth thought about arranging a marriage between Leicester and Mary, Queen of Scots as a means of controlling her Catholic cousin, but Mary chose Henry Stuart, Lord Darnley instead. When the Spanish Armada threatened, Leicester was commander of the land forces prepared to defend against the putative landing forces. He died not too long after the failure of the Armada, on September 4, 1588. The Encyclopedia Britannica summaries his character thusly:

Of his character it is more difficult to speak with confidence, but some features of it are indisputable. Being in person tall and remarkably handsome, he improved these advantages by a very ingratiating manner. A man of no small ability and still more ambition, he was nevertheless vain, and presumed at times upon his influence with the Queen to a degree that brought upon him a sharp rebuff. Yet Elizabeth stood by him. That she was ever really in love with him, as modern writers have supposed, is extremely questionable; but she saw in him some valuable qualities which marked him as the fitting recipient of high favours. He was a man of princely tastes, especially in architecture. At court he became latterly the leader of the Puritan party, and his letters were pervaded by expressions of religious feeling which it is hard to believe were insincere. Of the darker suspicions against him it is enough to say that much was certainly reported beyond the truth; but there remain some facts sufficiently disagreeable, and others, perhaps, sufficiently mysterious, to make a just estimate of the man a rather perplexing problem.

Robert Persons, SJ was born of yeoman stock and attended St. Mary's Hall at Oxford, becoming a Fellow and Tutor at Balliol in 1568. His attraction to Catholicism brought about his resignation in 1574; Persons traveled to the Continent and became a Jesuit on July 3, 1575. From 1579 to 1581 he served in England as a missionary priest with St. Edmund Campion. After the latter's arrest and execution, Persons returned to the Continent.

Allan as Cardinal--neither of those hopes came to fruition. But his interest in education certainly bore fruit. He founded seminaries in Valladolid, Seville, and Madrid, Spain; he started a school for Catholic boys at St. Omer in France now Stonyhurst in England; he became the rector of the Venerable English College in Rome. Persons died on April 15, 1610. The Catholic Encyclopedia summarizes his character thusly:

Father Persons was a man of great parts, eloquent, influential, zealous, spiritual, disinterested, fearless. Yet he had some of the defects of his qualities. He was masterful, sometimes a special pleader, and greater as a pioneer or sectional leader than as Generalissimo. Though his services in the mission field, and in the education of the clergy were priceless, his participation in politics and in clerical feuds cannot be justified except in certain aspects.

More on Father Persons here.
Posted by Stephanie A. Mann at 12:30 AM