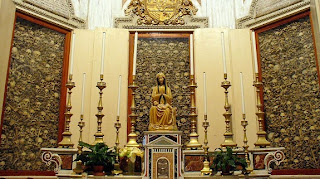 When Pope Paul VI canonized the Forty Martyrs of England and Wales in 1970, there were some who thought the action came at an inopportune time--ecumenical efforts between the Catholic Church and the Anglican Communion had been advancing since the Second Vatican Council and this was a bad reminder of existing and previous divisions. In the introduction to my book, Supremacy and Survival: How Catholics Endured the English Reformation, I quote Pope Paul VI's response to this criticism. He hoped that, through their intercession, the divisions between the Catholic Church and the Anglican Communion would be healed. This site quotes his comments from the homily Pope Paul offered on October 25, 1970 on this issue more completely:

May the blood of these Martyrs be able to heal the great wound inflicted upon God’s Church by reason of the separation of the Anglican Church from the Catholic Church. Is it not one--these Martyrs say to us--the Church founded by Christ? Is not this their witness? Their devotion to their nation gives us the assurance that on the day when--God willing--the unity of the faith and of Christian life is restored, no offence will be inflicted on the honour and sovereignty of a great country such as England. There will be no seeking to lessen the legitimate prestige and the worthy patrimony of piety and usage proper to the Anglican Church when the Roman Catholic Church--this humble “Servant of the Servants of God”-- is able to embrace her ever beloved Sister in the one authentic communion of the family of Christ: a communion of origin and of faith, a communion of priesthood and of rule, a communion of the Saints in the freedom and love of the Spirit of Jesus.

Last Sunday, Pope Francis canonized 800 martyrs--meaning that he has bypassed even Blessed Pope John Paul II for the most canonizations--the Martyrs of Otranto, slaughtered by Turkish invaders because they would not convert to Islam. As The Catholic World Report reports:

Although he has only been pope for two months, Pope Francis has now canonized more saints than any pope in history.


This interesting milestone was reached yesterday, when the Holy Father canonized 800 Italian martyrs killed in a 15th-century attack of the town of Otranto by Ottoman invaders. The men were murdered when they refused to reject Christ and convert to Islam. Dr. Donald Prudlo, associate professor of medieval history at Jacksonville State University in Alabama, briefly retold the new saints’story in an interview with Vatican Radio:


Mehmed II was one of the most powerful and successful emperors in Ottoman Turkish history. He had taken the impregnable city of Constantinople in 1453, and had pacified the Balkan regions. By the 1470s Mehmed 'The Conqueror' was preparing a death blow to Europe. His fleet sailed the Mediterranean without challenge. Having taken 'New Rome' he set his sights on 'Old Rome.' In order to test the resolve of Christian Europe he sent an exploratory raiding party in 1480. Its target was the small maritime town of Otranto in far south Italy. During this expedition thousands of people were massacred, in what was really an attempt to instill terror into the inhabitants of the peninsula. After the city fell, its civil and religious leaders were either beheaded or sawn into pieces. Eight hundred men of the town were offered the choice between conversion to Islam or death. Led by the tailor Antonio Primaldi, acting as spokesman for the group, they were beheaded, one by one, on a hill outside town while their families watched.

The significance of their sacrifice was clear. Antonio and his townsmen had, in reality, saved Europe – their bravery gave Christendom time both to regroup, and to realize the gravity of the threat. Mehmed II died the next year, at the age of only 49, frustrating Ottoman plans for expansion.

Relics of the Martyrs of Otranto can be seen in Naples’ Church of Santa Caterina a Formello (pictured above). A more detailed telling of the martyrs’ story can be read here.


During his homily at the Mass of canonization yesterday—the first of his pontificate—Pope Francis asked, “Where did they find the strength to remain faithful?”


Precisely from the faith, which makes us see beyond the limits of our human sight, beyond this earthly life … God will never leave us without strength and serenity. While we venerate the Martyrs of Otranto, let us ask God to sustain the many Christians who, precisely at this time, now, and in many parts of the world, are still suffering violence, that He give them the valor to be faithful and to respond to evil with good.

NBC news, however, like the critics of the 1970s, wonders about the effect of these canonizations on Catholic-Muslim relations:

But the choice to highlight their sacrifice may put a strain on the already fragile relationship between the Catholic Church and Islam.

Ever since his election, Pope Francis has called for greater dialogue between Christianity and other religions, in particular Islam. And so far, he has acted on that promise. He washed the feet of a young Muslim woman jailed in a juvenile prison on Holy Thursday, and reached out to the many “Muslim brothers and sisters” during his first Good Friday procession.

So why risk creating yet another inter-faith row with a celebration which some in the Muslim world may be seen as a provocation?

The answer is that it wasn’t Pope Francis’ choice in the first place. The decision to canonize the hundreds of Otranto martyrs was rubber-stamped by his predecessor, Pope Benedict XVI, on Feb. 11 - the same day he announced his resignation.

Excursus: The word choice of "rubber-stamped" is unfortunate and inaccurate: Pope Benedict XVI never rubber-stamped anything in his life! The reporter needs to improve her diction--one who rubber-stamps something has no power; operates at the lower levels of a political organization, or like a constitutional monarch, is a figurehead without real influence. The Supreme Pontiff of the Holy See is none of those things. In February of this year, Pope Benedict had convoked the consistory that approved the canonization the already blessed Martyrs of Otranto (beatified by Pope Clement XIV on the 14th of December in 1771). In fact, as the wikipedia article on the martyrs makes clear, Emeritus Pope Benedict was very active in the their progress to canonization:

In view of their possible canonisation, at the request of the archdiocese of Otranto, the process was recently resumed and confirmed in full the previous process. On 6 July 2007, Pope Benedict XVI issued a decree recognising that Primaldo and his fellow townsfolk were killed "out of hatred for their faith". On 20 December 2012 Benedict gave a private audience to cardinal Angelo Amato, S.D.B., prefect of the Congregation for the Causes of Saints, in which he authorised the Congregation to promulgate a decree regarding the miracle of the healing of sister Francesca Levote, attributed to the intercession of the Blessed Antonio Primaldo and his Companions.

This ends my excursus on the choice of the word "rubber-stamped"!

And this non-story goes on to blame Pope Benedict XVI for a rough patch in Catholic-Muslims relations because of the Regensburg speech in 2006. I say it's a non-story because of these two paragraphs:

It was a departing act of a pontiff that had become concerned about the mounting discrimination suffered by Christian minorities living in the Middle East in the wake of the Arab spring.

Pope Francis shares his predecessor’s concern. “By venerating the martyrs of Otranto” he said at Sunday’s canonization mass, “We ask God to protect the many Christians who in these times, and in many parts of the world, are still victims of violence”.

So if Pope Francis shares his predecessor's concern, how is there any conflict between Emeritus Pope Benedict and Pope Francis on the matter of canonizing the Martyrs of Otranto?

Beyond this immediate issue, I wonder whether one should expect that people outside the Catholic community should or would accept the Church's martyrs for the Faith. The historical reality and context of the time should be comprehensible to all, but the proclamation of and devotion to martyred saints, in our current divided state (thinking especially of the divisions between the Catholic Church and other Christian communities)--it seems to me a bit much to expect understanding and agremement. Not expecting it, why should one second guess the response to it? What do you think?
Posted by Stephanie A. Mann at 12:30 AM