The Death of the Prince of Wales 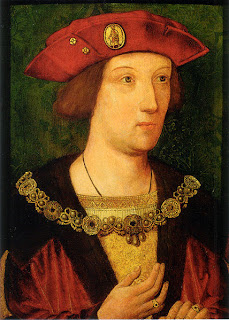 Not today's Prince Charles, of course, but Henry VII's eldest son, Prince Arthur. He died on April 2, 1502 while he and his young bride, Catherine of Aragon were in residence as Prince and Princess of Wales at Ludlow Castle. He was only 15 years old when he died, possibly of consumption or of the "sweating sickness," some kind of virus. Catherine of Aragon was ill too but she survived. Arthur was buried at Worcester Cathedral, without any members of his family attending. (King John is also buried at Worcester Cathedral!) After she recovered, Catherine of Aragon remained in seclusion until such time had passed to verify whether or not she was pregnant by Arthur. Once that time had passed--and she was not pregant--Henry, the king's younger son, was named Prince of Wales. Then Catherine of Aragon entered that long period of waiting that Giles Tremlett described so well in his recent biography of Henry VIII's first Queen as negotiations for her possible marriage to Prince Henry started and stalled.
Posted by Stephanie A. Mann at 2:05 AM