July 24 and 25: The Mother Loses Her Crown; The Son Gains Another 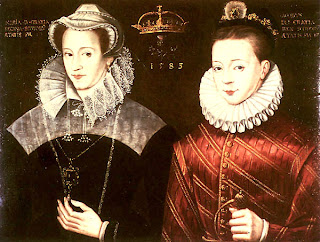 On July 24 in 1567, Mary the Queen of Scotland abdicated, allowing James, her infant son by Henry Stuart, Lord Darnley, to inherit the throne as the "Cradle King" the sixth of that name in Scotland.

On July 25 in 1603, James VI became James I of England, thus uniting the kingdoms of England, Ireland and Scotland under his personal rule.
The first date eventually led Mary to seek protection, which became imprisonment, from her cousin, Queen Elizabeth I. Held under house arrest, Mary became the focus of various plots to depose Elizabeth and bring Mary to the throne of England. Those plots finally led to her execution in 1587.
Leanda de Lisle describes the process of James VI's accession to the throne of England in her book, After Elizabeth: The Rise of James of Scotland and the Struggle for the Throne of England (she certainly seems to have a penchant for very long subtitles!).
Posted by Stephanie A. Mann at 5:39 AM