Wichita Area Chesterton Group Reading "The Well and the Shallows" 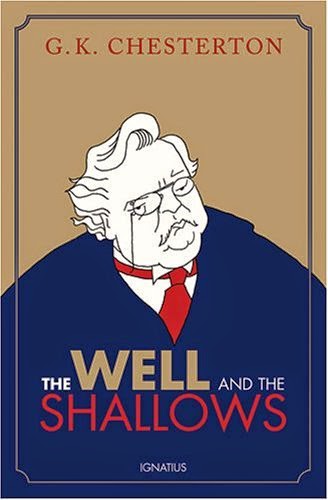 We held our second meeting of 2015 at Eighth Day Books last Friday and continued our reading of G.K. Chesterton's The Well and the Shallows. The American Chesterton Society publishes this description of this collection of essays and articles:

A few years after his conversion, G.K. Chesterton began contributing articles to Catholic magazines on both sides of the Atlantic. The bulk of these of essays were reprinted in The Thing: Why I am a Catholic (1929) and this book, The Well and the Shallows (1935), which could almost be called The Thing: Part II or, as he suggests, Why I Would Have Become a Catholic if I Had Not Already Done So.

As always, he takes on all subjects, writing about anything and everything, but not only are these essays more specifically Catholic than his other works, there is clearly a sense of foreboding. He warns in the introduction that there are not as many jokes as his readers are used to. There is an urgent and somber sense that there are very dark and desperate days ahead, and that among other dangerous developments, the worst war that the world has ever seen is just over the horizon. He saw before anyone else that something terrible was about to happen to the Jews, and he proclaimed that he would die defending the last Jew in Europe. In spite of that, there are still fools who accuse him of hating the Jews.

Chesterton’s prophecies are chilling. But what is perhaps more shocking than his prophecies falling on deaf ears at the time, is that everything he said is still true – and still ignored. We have forgotten completely how bad the world got and how it got that way. Chesterton lays it all out in this book. What do these trends have in common: Birth control, State-enforced education, scientific officialism, academic deconstruction, and Anti-Catholicism? They are standard elements of the culture in present day America. But they were also the exact same trends seen in the rise of Nazi Germany.

The essay concludes with some comments about suffering and self-denial! Perfect for Lent:

There are two particular groups who find this book especially challenging to their ideas: Protestants and Catholics.

Protestantism is a large category and the only common factor it has is anti-Catholicism. Chesterton sympathizes with new religious movements. He knows that these people are seeking God. He remembers Christ’s dictum that he who seeks finds. But he also notes that most Protestants movements have lost their original reasons for existing. They simply take on some new form of anti-Catholicism to justify their position of remaining outside of the Church. Ultimately, Chesterton argues, the Catholic Church is right and everything thing else is wrong, or perhaps more accurately, the Church is complete and everything else is incomplete. The Church defends not only the eternal truths but the all the good things that are under attack in the modern world: the family, the poor, self-government, self-control. Protestants who at first feel that their toes are getting stepped on soon realize that Chesterton’s complete view of things has their own best interests in mind. The Church is the Well. It is deep and truth is at the bottom of it. Everything else is the Shallows.

It is when Chesterton starts talking about Catholic social teaching that many Catholics start suddenly going deaf or looking for something else to read. Chesterton appeals to the Church’s long history of serving the poor and bringing about social justice. He believes that Church teachings would be best fulfilled in the implementation of widespread property ownership, self-sufficiency, and family-centered trades. For those who continue to be puzzled by Distributism, perhaps the best one-chapter explanation of it anywhere can be found in the essay entitled: “Reflections on a Rotten Apple.”

There are people who enjoy Chesterton’s abstract thinking, but get prickly when he goes concrete. It is fine to argue that the Catholic Church is right, and modernism is wrong, but it gets downright uncomfortable when Chesterton starts talking about some of the real practical effects of being Catholic. It may mean making some sacrifices. Giving something up. Suffering, even. But we forget how deep is the well. Not only do we draw truth from it, we also draw strength and refreshment and eternal satisfaction.

Dale Ahlquist, President of the American Chesterton Society, will talk about Distributism and Catholic teaching about social justice at the Catholic Culture Conference scheduled at the Spiritual Life Center here in Wichita on April 17 and 18. More info here.

We are reading The Well and the Shallows in the the Collected Works edition from Ignatius Press, but Eighth Day Books also has the separate volume, pictured above, available.
Posted by Stephanie A. Mann at 12:30 AM