Filcock, and Barkworth, and Line: Three Martyrs at Tyburn

St. Anne Line was hung and then Blessed Mark Barkworth, OSB and Blessed Roger Filcock were hung, drawn, and quartered at Tyburn on February 27, 1601.

Anne Heigham Line was a convert to Catholicism; she and her brother William Heigham were disinherited and disowned by their Calvinist father. In 1586 she married Roger Line, another disinherited convert. Not long after Anne and Roger married, he and William were arrested for attending Mass and were exiled from England. Roger lived in Flanders and died in 1594.

Father John Gerard SJ, author of the famous book Autobiography of an Elizabethan Priest, asked Anne to manage two different safe houses for Jesuits, even though she was ill, but because she was destitute, otherwise surviving on teaching and sewing.

She was arrested on the Feast of the Presentation, February 2, 1601, when Father Francis Page was celebrating Mass; he escaped with her help. She was tried on February 26, carried to court in a chair, where she admitted joyfully that she had helped Father Page escape and only regretted that she had not been able to help even more priests escape!

She was hung at Tyburn in London on February 27 and repeated her statement from court before her execution: "I am sentenced to die for harboring a Catholic priest, and so far I am from repenting for having so done, that I wish, with all my soul, that where I have entertained one, I could have entertained a thousand." Two priests, Father Roger Filcock and Father Mark Barkworth, paid tribute to her before their own executions, drawn, hung, and quartered. Father Filcock kissed her dead hand and the hem of her dress as she still hung from the gibbet and proclaimed, “You have gotten the start of us, sister, but we will follow you as quickly as we may.”

Blessed Mark Barkworth OSB was born about 1572 at Searby in Lincolnshire. He studied for a time at Oxford, though no record remains of his stay there. He was received into the Catholic Church at Douai in 1593, by Father George, a Flemish Jesuit and entered the College there with a view to the priesthood. He matriculated at Douai University on 5 October 1594.

On account of an outbreak of the plague, in 1596 Barkworth was sent to Rome and thence to Valladolid in Spain, where he entered the English College on 28 December 1596. On his way to Spain he is said to have had a vision of St Benedict, who told him he would die a martyr, in the Benedictine habit. While at Valladolid he make firmer contact with to the Benedictine Order. The "Catholic Encyclopedia" notes that there are accounts that his interest in the Benedictines resulted in suffering at the hands of the College superiors, but the Encyclopedia expresses scepticism, suggesting anti-Jesuit bias.

Barkworth was ordained priest at the English College some time before July 1599, when he set out for the English Mission together with Father Thomas Garnet. On his way he stayed at the Benedictine Monastery of Hyrache in Navarre, where his wish to join the order was granted by his being made an Oblate with the privilege of making profession at the hour of death.

After having escaped from the hands of the Huguenots of La Rochelle, he was arrested on reaching England and thrown into Newgate, where he was imprisoned for six months, and was then transferred to Bridewell. There he wrote an appeal to Robert Cecil, signed "George Barkworth". At his examinations he was reported to behave with fearlessness and frank gaiety. Having been condemned with a formal jury verdict, he was thrown into "Limbo", the horrible underground dungeon at Newgate, where he is said to have remained "very cheerful" till his death.

Barkworth sang, on the way to Tyburn, the Paschal Anthem: "Hæc dies quam, fecit Dominus exultemus et lætemur in ea", and Father Filcock joined him in the chant:

Hæc dies quam fecit Dominus; [This is the day which the Lord has made:]
exsultemus, et lætemur in ea. [let us be glad and rejoice in it.]

At Tyburn he told the people: "I am come here to die, being a Catholic, a priest, and a religious man, belonging to the Order of St Benedict; it was by this same order that England was converted."

He was said to be "a man of stature tall and well proportioned showing strength, the hair of his head brown, his beard yellow, somewhat heavy eyed". He was of a cheerful disposition. He suffered in the Benedictine habit, under which he wore a hair-shirt. It was noticed that his knees were, like St. James', hardened by constant kneeling, and an apprentice in the crowd picking up his legs, after the quartering, called out: "Which of you Gospellers can show such a knee?" Contrary to usual practice, the quarters of the priests were not exposed but buried near the scaffold. They were later retrieved by Catholics. 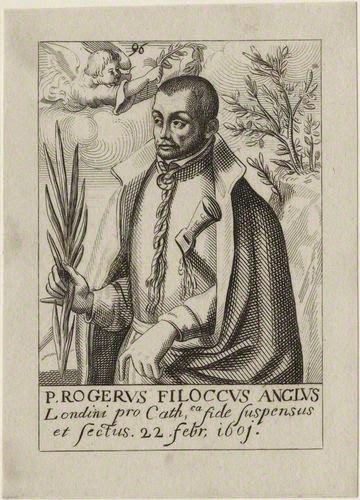 Barkworth was beatified by Pope Pius XI on 15 December 1929.

Blessed Roger Filcock (1570-1601) was arrested in England while he was fulfilling a probationary period prior to entering the Jesuits. He had studied at the English College in Rheims, France and then in Valladolid, Spain, but when he asked to join the Society he was encouraged to apply again after ministering for awhile in England.

His journey into England was difficult enough. The ship he was traveling on from Bilbao, Spain to Calais, France, was becalmed just outside the port and fell pray to a Dutch ship blockading the harbor. Filcock was captured, but managed to escape and land surreptitiously on the shore in Kent in 1598. Soon after he began his ministry, he contacted Father Henry Garnet, the Jesuit superior, asking to become a Jesuit. He was accepted into the Society in 1600, but then was betrayed by someone he had studied with in Spain. He was arrested and committed to Newgate Prison in London. His trial did not last long, despite the fact that there was no evidence against him and that the names in the indictment were not names he had used. Together with Father Mark Barkworth, a Benedictine, he was tied to a hurdle and dragged through the streets to Tyburn. Barkworth was first to be hung, disembowelled and quartered. Filcock had to watch his companion suffer, knowing that he would immediately follow.