'Pilgrimage and England's cathedrals' employs a ground-breaking combination of interdisciplinary perspectives and methodologies to identify and analyse the core dynamics of pilgrimage and sacred sites in England from the 11th to 21st centuries, assess the growing significance of English cathedrals as sacred/heritage sites today, and inform management of/public engagement with these iconic buildings. Set against the background of the worldwide growth of pilgrimage and increasing importance of sacred sites, the project's innovative approaches and timely research agenda also contributes substantially to defining and establishing the emerging field of Pilgrimage Studies.

At the heart of this project is a new, wide-ranging analysis of the meaning and breadth of 'pilgrimage' and the role of sacred places past and present. Why did pilgrimage matter in the past and why does it still matter today? In exploring these issues, the project focuses attention on the role of cathedrals: places where, uniquely, national and local history and identity, material culture and traditional and emerging religious practice can be encountered together. Pilgrimage was central to the development and status of English cathedrals in the Middle Ages and although most shrines were destroyed at the Reformation, many of the great churches and monasteries which housed them remain as cathedrals today, literally shaped by their pilgrim past and retaining a strong pilgrimage legacy. Anglican cathedrals are increasingly refocusing on and reinstating shrines, reflecting an international multi-faith phenomenon in which an estimated 200 million people across the world engage in pilgrimage and religious tourism annually. 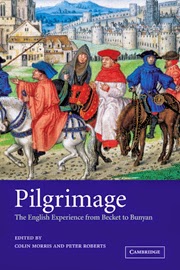 Historically the pilgrims going to a certain cathedral were intent on visiting a saint's shrine, praying for his or her intercession, acting in penitence for some great personal sin or in reparation for the sake some great blessing on themselves or another. Pilgrimage on earth was aimed at eventual arrival in heaven. It was expensive, dangerous--although pilgrims were supposed to be protected--arduous, and time-consuming. Walking along the pilgrimage route, the pilgrims were focused on their goal.

Although they were stripped of their shrines and saintly significance after the English Reformation, English cathedrals have remained a goal of pilgrimage. The project organizers comment that many coming to the cathedrals in the study, York, Durham, Canterbury, and Westminster, are not even Christian or may practice no faith at all:

Moreover, over 40% of those visitors came from faith traditions other than Christianity or had no religious affiliation. This suggests that cathedrals are seen as shaped by, but transcending, Christianity, offering unique access to the 'spiritual' within the context of history, heritage and culture, and providing meaningful spaces for people of all faiths and none. These developments demand fuller, rigorous, multi-disciplinary investigation so that implications for cathedrals, visitors and communities can be explored in detail.

File that under the heading "The Unintended Reformation"! The Protestant reformers of the sixteenth century in England would be shocked. Since Christianity means Jesus Christ, transcending Christianity would be the furthest thing in their minds; yet, their reformation started the process of destroying the worldview that held saints in heaven and sinners on earth (and in purgatory) in a community of pilgrimage and love.
Posted by Stephanie A. Mann at 12:30 AM