Blame the Irish? No--Blame the English; Why Catholics Can't Sing 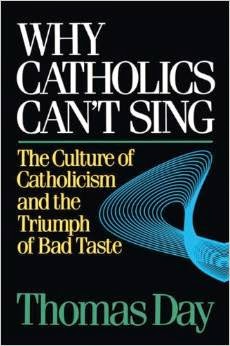 From First Things, an article in which the author (facetiously) blames the fact that Catholics in the USA can't/don't sing at Mass on Irish influence. He imagines conversing with his parish priest to solve the problem of "Why can’t Catholics sing like Lutherans?" and his answer comes back, "Blame the Irish." I thought we were supposed to blame Canada. Or Bush.

Q: Let’s get right to the point. Why are Catholics such poor hymn singers?
A: It’s because we don’t have enough Lutheran converts.

Q: The hymn singing I hear hardly amounts to a “joyful noise.” Sounds more like plaintive squeaks from depressed marmosets.
A: Bless you, my son, for your candor. . . .

Q: And then tell them any nine little old Lutheran widows can sing better than the whole lot of them.
A: How about if I said eight Methodists on walkers?

Q: That’ll work. You tell them how to sing: Stand up straight, hymnal front and center, lungs filled, voices projected up and out, like they want to praise God in song.
A: And after that?

Q: Try them out on a couple verses of A Mighty Fortress and see if they haven’t improved.
A: I get the idea. But it’ll never work.

Q: Come again.
A: Simple history. German Lutherans came to America with two hundred years of hymns in their history and they kept writing new ones. Irish Catholics came with bawdy songs that can’t be sung in mixed company; it was the only music the English let them sing.

Q: What?
A: Sure. The Irish invented the low spoken mass. Catholics singing hymns in public would otherwise have attracted the attention of their English Protestant oppressors. Besides, if they can’t bang a bodhran in church they wouldn’t sing anyway, just on principle.

The Irish did not invent the low spoken Mass, but they certainly used it! Low Mass, in which the priest speaks what he would sing at High Mass developed in monasteries and at cathedrals where many priests each celebrated Mass in separate chapels. The author, Russell E. Saltzman links a review of Thomas Day's Why Catholics Can't Sing: The Culture of Catholicism and the Triumph of Bad Taste. He misread or misstates what the reviewer said; she didn't say the Irish invented the Low Mass--they just used it for safety's sake:

The Irish people were persecuted for centuries. Their glory is that they "kept the faith." There was little opportunity for singing at Masses celebrated behind the hedge rows; one did not have to attract the attention of English soldiers by singing. The silent low Mass was the norm.

I read Day's book when it came out: he blamed the poor musical quality of the hymns chosen for the lack of congregational singing. When hymns like "Holy, Holy, Holy", "Holy God, We Praise Thy Name," various Marian hymns, "Faith of Our Fathers", or other traditional hymns are selected, Catholics usually sing out well, in my experience.

Even though William Byrd wrote his Masses for Three, Four, and Five Voices and the Gradualia so Catholics in England would have music for both the Ordinary and the Propers of the Mass, most Masses in England during the recusant era, from Elizabeth I's reign to the late eighteenth century--unless they were celebrated at the foreign government embassy chapels in London--were probably Low, just because they were illegal and therefore hidden.

What's so opportune about this discussion is that I have a section in my Cardinal Newman lecture on how Newman's Oratorians, including Fathers Edward Caswall and Frederick Faber wrote hymns for congregational singing or translated Latin hymns for the same purpose. Certainly Irish Catholics in England attending the Oratory churches in Birmingham and London learned to sing hymns in church--without a bodhran! Cardinal Newman on violin and the Irish on a bodhran--what a St. Patrick's Day!
Posted by Stephanie A. Mann at 12:30 AM