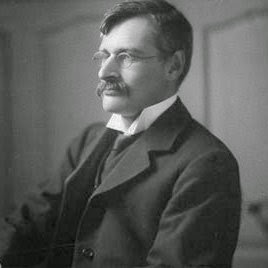 George Macauley Trevelyan was born on February 16, 1876 in Stratford-upon-Avon. He was the great nephew of Thomas Babington Macauley and he maintained his relative's Whig view of English History.

This review essay from The London Review of Books of two biographies of G.M. Trevelyan sums up his beliefs:

G.M. Trevelyan was the strongly agnostic son of a mildly ‘nothingarian’ father. The grandparents were Evangelical Anglican on one side, Unitarian on the other. All three Trevelyan brothers were unbelievers, but with George it was much more than mere absence of belief, it was a creed in its own right. ‘Two terrible things have happened this week,’ he was heard to say, ‘my son has bought a motorbike and my daughter has become a Christian.’ As a young don, he was turned down on religious grounds by the first great love of his life, the daughter of a great Anglican family. In the aftermath of this rejection, he thought ‘a definitely agnostic atmosphere is essential for my free development of work and of life’. His daughter, the wife of a historian bishop with whom Trevelyan got on rather well, not surprisingly softens the outlines, notes his regular attendance at Chapel when Master of Trinity (1940-51), and records his saying: ‘If there had been more sensible clergymen in Cambridge in my time I could have been a churchman.’

But the Trevelyan who attended Chapel as an official duty – Trinity was worth a mass – had essentially the same outlook as the Harrow schoolboy who had refused to be confirmed. He preached a sermon in Trinity in 1945, but it was not a Christian sermon. To say he was merely anti-clerical is only partly true, though he retained the old Evangelical family feeling against high churchmen, for his definition of anti-clericalism was pretty capacious. Talking in old age of Lucretius, he burst out: ‘And doesn’t it strike you as extraordinary that Lucretius should have lived and written only a few years before the greatest outburst of clericalism that the world has ever seen?’ Trevelyan’s judgment of Christianity was probably formed essentially by his experience of it as a university party at Cambridge: his knowledge of it in other contexts was slight, though he did once stoop to arrange an honorary degree for Dorothy Sayers. But his main reason for opposing Christianity was that he believed in something else, and did so to the end.

He really believed in Carlyle, Shelley, Meredith, civic altruism, the countryside, Garibaldi, and the lives of heroes teaching by example. If he had not been more gentleman than intellectual, he might have become a Comtean; as it was, he remained a Carlylean. His last two publications were attempts to put Carlyle and Meredith before the public of the 1950s; he had been trying to do the same thing in his The Meredith Pocket Book of 1906. His Clark Lectures of 1953, his last sustained composition, showed how little two wars had affected his creed. He defended Scott as the great social historian who had made Carlyle and Macaulay possible, vindicated Shelley against Arnold, and preached a religion of poetry: ‘It is joy, joy in our inmost hearts. It is a passion like love or it is nothing.’ He fused England, poetry, joy, youth and landscape in a single sacramental experience. If this is rather like Arnold, dynastic connections are not far to seek: his wife was the great-niece of the poet, and her mother, Mrs Humphry Ward of Robert Elsmere fame, had even composed a special free-thinkers’ marriage service for G.M. Trevelyan’s wedding. The late Victorian child was truly father to the Master of Trinity. Trevelyan was as strongly opposed to modernity, urban modernity, as any Christian. If he could move people ‘to seriously question the value of modern life, I shall be quite satisfied’. He was as explicitly sacramental as any Christian. He saw the modern passion for mountains, rocks and moors as ‘one of the sacraments prepared for man or discovered by man’. In this he had all the seriousness and severity of his Evangelical ancestors. He was a pious pagan who took his paganism with a deep reverence, without any touch of hedonism. He felt kinship with Meredith, Shelley and Carlyle because they – Meredith particularly – seemed to him to be pious pagans who had faced the problems of life without religion with a religious outlook. He even believed in a pagan version of life after death. The statue of Garibaldi in every Italian town was ‘the symbol of the hope of resurrection after centuries of death’. At times of difficulty, his thoughts turned to Garibaldi, as the orthodox might look to Christ.

Not "What Would Jesus Do?" I guess, but "What Would Garibaldi Do?" According to the review, his last thoughts and words were historical:

The day before he died, Trevelyan had Macaulay’s Third Chapter read to him. His last words were ‘Peterloo’. The nurse asked: ‘What about Peterloo, Master?’ He replied, ‘1819,’ and did not speak again.

The chapter referred to is a great work of historical writing volume one of Trevelyan's great uncle's The History of England, from the Accession of James II, : "The State Of England In 1685". You can hear it read here.
Posted by Stephanie A. Mann at 1:00 AM