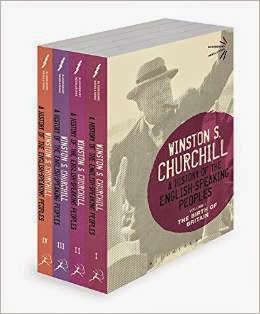 In England last week they celebrated the 50th anniversary of Sir Winston Churchill's funeral. Professor John Charmley, head of the Interdisciplinary Institute at the University of East Anglia, Norwich writes in The Catholic Herald about Churchill's anti-Catholic bias in The History of the English-Speaking Peoples:

The volumes illustrate Churchill’s great strengths as a historian and have a strong narrative drive, as well as clearly delineated heroes and villains: the former are usually Protestant, the latter invariably Catholic. This reflected not only the reality that England’s hereditary enemies were the Catholic countries of Spain and France, but also the bias inculcated by three centuries of Anglican state-sponsored propaganda.

Churchill imbibed, and later served up, the classic Victorian Anglican version of our island story. . . .

Churchill was, naturally, equally celebratory about the “Glorious Revolution” of 1688. He described how a “great Protestant wind” rose in the “hearts of men, rising in fierce gusts to gale fury” to blow away the Catholic tyrant, James II, a low fellow prepared to sacrifice English freedom to the dictates of his faith. The English people were, Churchill declared, convinced “from the whole character of the Catholic Church at this time, that once he wielded the sword their choice would be the Mass or the stake”. The “Protestant wind” that brought King Billy to England, blew away the dark shadows of priestcraft and opened the way to the sun-kissed uplands of liberty, which would be defended by gallant Whigs such as his own ancestor, the first Duke of Marlborough.

Professor Charmley points out that Newman identified Churchill's historical type in Lectures On the Present Position of Catholics in England:

Churchill was, in fact, that archetype described by Newman in his Lectures on the Present Position of Catholics in England, who justified his anti-Catholicism by declaring: “It is too notorious for proof; every one knows it; every book says it; it has been so ruled long ago.” The book was full of “that ungenerous spirit which energises and operates so widely and so unweariedly in the Protestant community”.

Far from Newman’s work being, in Owen Chadwick’s words, a sad example of “a refined mind bothering itself with trash”, it was a noble attempt to combat the “black legend” about Catholicism which formed part of the Victorian version of our history. Only a few years before, in 1851, the restoration by Rome of the Catholic hierarchy in England had led to an outbreak of anti-Catholic hysteria led by the Prime Minister, Lord John Russell, whose hereditary prejudices led him to dub it “papal aggression”. In 1874 Gladstone would declare that no Catholic Englishman could be fully trusted because he owed his ultimate allegiance to a “foreign potentate”. So deep-rooted was this prejudice that Newman himself predicted that the response to his sallies would be: “It is rather too much in the 19th century to be told to begin history again, and to have to reverse our elementary facts.” Churchill’s History bore witness to the accuracy of that prophecy.

Churchill, however, does regret the atrocities of Henry VIII's reign--the executions of so many nobles, religious, St. Thomas More, St. John Fisher, etc--but since his focus is on and his delight is in the development of Parliamentary rule in Great Britain, Churchill maintains a progressive view of the past. If events in the past lead to the triumph of parliamentary principles and democracy, they were necessary if regrettable. He also does admit that if King James II really meant to establish religious freedom in England, it was regrettable that he had to be deposed. Perhaps even if the cause of religious freedom was delayed by Parliament in 1688, it was still all to the good since Parliament decided for religious freedom for Catholics in the late 18th and early (1829) 19th centuries.
Posted by Stephanie A. Mann at 12:30 AM

Email ThisBlogThis!Share to TwitterShare to FacebookShare to Pinterest
Labels: Blessed John Henry Newman, Lectures on the Present Position of Catholics in England, The Catholic Herald, The History of the English Speaking Peoples, Winston Churchill