Victorian Images of the English Past 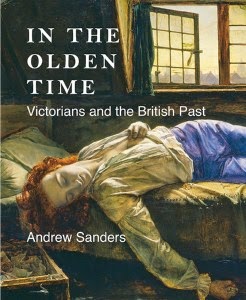 Reviewed in The Weekly Standard, this book published by The Paul Mellon Centre for Studies in British Art describes and depicts how Victorian artists imagined their country's past:

Inspired by Roy Strong’s classic And When Did You Last See Your Father? (1977), which rescued Victorian history painting from oblivion, Andrew Sanders’s lavishly illustrated In the Olden Timeexplores how the Victorians responded to key figures in their political and cultural tradition, and how they cheerfully molded the past to conform to the needs of the present. As laid out by the leading historian of the day, Thomas Babington Macaulay, the Victorian interpretation of history was Whiggish, with clearly defined heroes and villains and yielding useful lessons. Embracing the notion of progress, it presented history as a steady movement towards a balanced constitution and the representative government of the Victorian era, an object of envy for the less fortunate folk living on the Continent.

The challenge of making the past come alive was eagerly accepted by novelists and artists, says Sanders. Sir Walter Scott’s Waverly (1824), set during the Jacobite rising in 1745, pioneered the genre by plunging fictional characters into the middle of momentous events. Said Thomas Carlyle of Scott and his imitators: “The historical novel taught us that the bygone ages of the land were actually filled with living men, not by protocols, state papers, controversies and abstractions of men.”

In their efforts, novelists and painters took pains to get the physical details right, relying on antiquarian handbooks on dress and armor. Scott thus provided meticulous descriptions of clothing and interiors while painters fussed endlessly over costumes. Occasionally, the result looked a little too stiff: Thackeray once complained that Sir Edwin Landseer’s “gentlemen and ladies do not look as if they were accustomed to their dresses, for all their correctness, but had put them on for the first time.”

As the book description notes, however, the author also examines the Victorian view of England's religious history:

In this richly textured and wide-ranging survey of Victorian attitudes to the past, Andrew Sanders builds on Roy Strong's groundbreaking book And when did you last see your father?: The Victorian Painter and British History (1978). Sanders explores the essentially literary nature of Victorian history writing, and he reveals the degree to which painters were indebted to written records both fictional and factual. Starting with a stimulating comparison of Queens Elizabeth I and Victoria, In the Olden Time examines works by poets and painters, essayists and dramatists, architects and musicians, including Jane Austen, John Donne, William Shakespeare, and John Soane. Together with a study of religious history as seen through the eyes of architect and critic Augustus Pugin and journalist William Cobbett, this book offers an original view of Victorian responses to British history, presenting a fresh investigation of unexpected Victorian attitudes and the establishment of particular 20th-century prejudices and bias.

There are certainly some very evocative historical paintings of the English Reformation era including several images of St. Thomas More, whose birthday we celebrate tomorrow. For example: John Herbert Rogers's depiction of St. Thomas More and his daughter Meg in the Tower of London; Edward Matthew Ward's image of Meg and More meeting on his way back to the Tower after being sentenced to the death of a traitor; Charles Landseer's scene of Meg paying for her father's head after his execution; and Lucy Madox Brown's painting of Meg obtaining her father's head before it was cast into the Thames.
Posted by Stephanie A. Mann at 12:30 AM