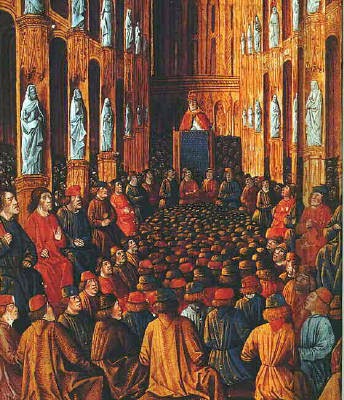 "Humanity has been grappling with these questions throughout human history.  And lest we get on our high horse and think this is unique to some other place, remember that during the Crusades and the Inquisition, people committed terrible deeds in the name of Christ."--President Barack Obama, National Prayer Breakfast, February 5, 2015

History by sound bite is never a good idea and President Obama has been receiving lots of criticism for this remark which some have taken to create a moral equivalence between the Crusades and current ISIS atrocities or between the Inquisition (Spanish or otherwise, I assume) and the ISIS burning the Jordanian pilot alive.

Matt Swaim and I will discuss this in our Catholic History Apologetics Series on the Son Rise Morning Show Monday morning, February 9--in my usual time slot a little after 7:45 a.m. Eastern/6:45 a.m. Central.

Matt and I were going to talk about the Crusades anyway this month, but the President's remarks gave the schedule some greater urgency! Live live here.

Image above: "Pope Urban II at the Council of Clermont, given a late Gothic setting in this illumination from the Livre des Passages d'Outre-mer, c. 1490."

Full disclosure: I am a former Crusader! That is, I attended Kapaun-Mt. Carmel High School and our mascot was/is The Crusader!
Posted by Stephanie A. Mann at 1:00 AM