The Arrest of St. Anne Line 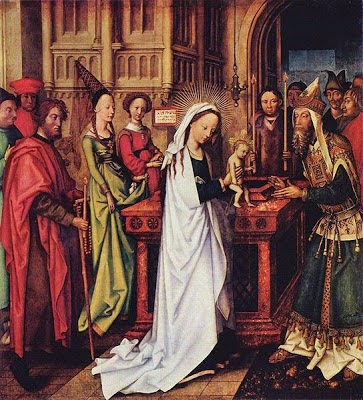 On Candlemas, February 2, 1601, Jesuit priest, Father Francis Page, was celebrating Mass for the Feast of the Presentation of Our Lord in the Temple at the safe house in London run by Anne Line.
Father John Gerard, SJ, author of the memoir Autobiography of a Hunted Priest had asked the widowed Catholic convert to be the housekeeper for the Catholic priests staying in London. On that day, the safe house proved to be none too safe, as pursuivants entered the house as Mass was in progress. Father Page was able to discard his vestments and mingle with the congregation, but Anne Line was not able to escape.Since she was the keeper of the house, and the pursuivants had found an altar, vestments, and all the altar vessels for the celebration of Catholic Mass, Anne Line was arrested.She was held and tried and executed for harboring and assisting priests on February 27, 1601. One of the priests executed that day after her at Tyburn, Blessed Roger Filcock, had once been a guest in the safe house. Father Francis Page was eventually captured and executed on April 20, 1602. St. Anne Line is one of the Forty Martyrs of England and Wales canonized by Pope Paul VI in 1970--she shares a separate feast with St. Margaret Clitherow and St. Margaret Ward. Blessed Roger Filcock (and his companion on the way to Tyburn, Blessed Mark Barkworth) were beatified by Blessed John Paul II in 1987 among the 85 Martyrs of England and Wales, and Blessed Francis Page was beatified by Pope Pius XI in 1929, among 136 martyrs of England and Wales.
Posted by Stephanie A. Mann at 12:30 AM