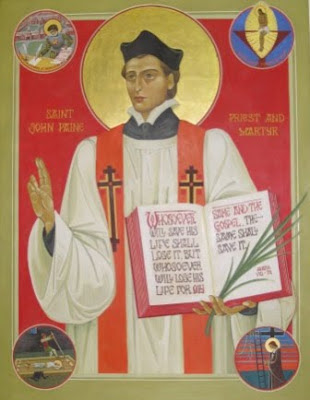 According the website for the Catholic Church in Colchester, England dedicated to St. John Payne (which also provides us with the image at the right):

John Payne was a native of the Diocese of Peterborough, but the date of his birth remains unknown. There has been some speculation about his early life, but his first association with Essex seems to have been as a steward to the Shelley family of Stondon Hall. He was ordained at Cambrai on April 7th 1576 and left for England shortly afterwards with St. Cuthbert Mayne.

He acted as chaplain and steward to Lady Petre at Ingatestone Hall and also ministered to catholics in the district. He worked further afield too and is known to have taken lodgings in London. A successful pastor, he was brought to the attention of the authorities and was imprisoned during the winter of 1576-77. . . .

Following several unsuccessful attempts to secure a confession of guilt, John Payne was executed at Chelmsford on April 2nd 1582 - one of 127 priests put to death during the reign of Elizabeth I. He was one of the English and Welsh Martyrs beatified by Pope Leo XIII on December 29th 1886. The process was again resumed under Pope Pius XI in 1923 and Blessed John Payne was included in a smaller group of 40 martyrs proposed by the Bishops of England and Wales and approved by Rome in 1960. The Forty Martyrs were canonised by Pope Paul VI in October 1970.

Anne Petre (pronounced Peter), mentioned above, was the widow of Sir William Petre, who served as Secretary of State for four of the five Tudor monarchs, while remaining Catholic (although he did profit from the Dissolution of the Monasteries and was instrumental in the destruction of the Gilbertine monastic movement, the only native monastic order in England, founded by St. Gilbert of Sempringham!). As the wikipedia article linked above notes:

Sir Williams's widow, Anne, who survived him many years, was also Catholic; she lived on at Ingatestone Hall, and there received and sheltered many of the seminary priests, whose presence was strictly forbidden in England by Elizabeth's law at that time. Coming from Douai they were usually missionaries to the persecuted Catholics, but sometimes plotters against the protestant Queen. Amongst them was John Payne, who lived for some time at Ingatestone Hall under the protection of old Lady Petre. In 1577, he was arrested at Ingatestone, thrown into prison for three weeks, and then released. He returned to France by the end of the year, but it was not long before he was back in England, and residing at Ingatestone Hall, where he passed as Lady Petre's steward. In 1581, information was laid against him, and he was arrested at Warwick and tried, not only for saying Mass, which was then a punishable offence, but also for plotting against Elizabeth. After long investigation, trial, and torture, he was executed in 1582 at Chelmsford. John Payne was nephew of Rector Woodward, of Ingatestone who had resigned rather than conform. Lady Petre herself was on the list of recusants whose addresses were to be sent up in 1582. The trial and execution of her confessor and pseudo-steward seems to have been a severe blow to the old lady, for she died in April of the same year and was buried with her husband in the vault in the chancel, and her effigy lies by his on the tomb above.
Posted by Stephanie A. Mann at 2:07 AM