Martyrs on the Isle of Wight 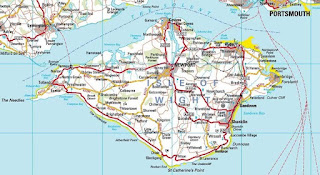 The Catholic Church of St. Mary's, Ride, on the Isle of Wight notes that 2004 "mark[ed] the 75th anniversary of the Beatification of the 136 English and Welsh martyrs [by Pope Pius XI in 1929]who gave their lives so heroically at the time of the Reformation and in the subsequent penal days. Two of the martyrs are particularly remembered on the Isle of Wight where they were executed in 1586. Blessed Robert Anderton and Blessed William Marsden had never intended to set foot on the Island. It was only by a freak storm at sea that their ship took shelter at Cowes. They were betrayed when they were heard praying, "O Lord thy Will be done! But if we are to die, suffer us to die for Thy cause in our own country. Let us not be remembered as the first seminarians who have perished in the waters". Of all the iniquitous laws against Catholics, Statute "27 Elizabeth" was the most ferocious as it made it high treason for a priest ordained abroad to set foot in England. There was generous financial reward for reporting papists so it was no surprise when on disembarking at Cowes they were immediately arrested and sent to Winchester for trial at the Spring Assizes.

Their story however starts when they first met at Rivington Grammer School near Chorley in Lancashire. The two young men immediately became friends. They became almost inseparable. They were to pray, study, travel and ultimate die together as martyrs for Christ. From Lancashire they went to Oxford to continue their education and were enrolled at Brasenose College in 1578. It is recorded that both were "unassuming but full of life and spirits and they were remarkable for their piety, devotion and zeal for all things sacred." (Pollen, Acts 82) They set off together in July 1580 for Douai College near Rheims and offered themselves to Almighty God in the Holy Priesthood. This seminary in France was the venue for many young Englishmen (such as Robert Anderton and William Marsden) who wished to study for the priesthood and return to offer Mass and spread the Faith in their native homeland. It was founded in 1568 by Cardinal William Allen. English Catholics liked to think of Douai as an "Oxford over the water" until happier days should return to the Dowry of Mary. . . .Read the rest here.

Note that there is an Ordinariate group based at St. Mary's Ride, with a former Anglican minister, now an ordained Catholic priest!
Posted by Stephanie A. Mann at 2:21 AM