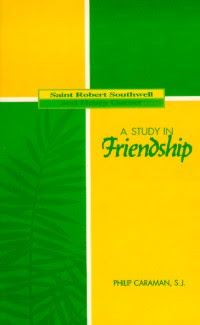 From The Institute of Jesuit Studies in St. Louis, MO (The Rome of the West!):
Saint Robert Southwell and Henry Garnet: A Study in Friendship by Philip Caraman, SJ--

This character study attempts to enter into the mind and heart of a brilliant, attractive, and astonishingly brave Elizabethan Jesuit, Robert Southwell, who was also a poet, a master of prose, and a martyr. He had a remarkable capacity for friendship, a subject on which he dwelt in his verse, his prose works, his meditations, and his letters. Among his dearest friends was Henry Garnet, a fellow Jesuit. Together they shared mortal dangers and a common ideal of religious commitment, both often described and expressed in their letters. Southwell's poems form a considerable part of this book, and they are often set in the framework of Garnet's letters, many of which were written to Claudio Aquaviva, superior general of the Jesuits and also a friend of them both. Robert Southwell's mother had been a playmate of Queen Elizabeth I; Sir Robert Cecil was his cousin. Yet as an English Jesuit priest he suffered torture for three years and in 1595 was hanged, drawn, and quartered at Tyburn. A few years later, in 1606, in St. Paul's Churchyard in London, Garnet suffered the same death for the same commitment.

This is a miniature masterpiece of biography and insight. With tremendous sympathy and delicacy, Caraman enters into the relationship between these two men: how they complemented one another in their mission to set up the network for missionary priests in London and throughout the countryside. Garnet was the superior, yet he accorded Southwell much of the credit and the leadership of their efforts because of Southwell's gentle, empathetic appeal to both priests and laity. When Southwell was finally arrested, Garnett was briefly lost emotionally and psychologically. He asked to be replaced as the Jesuit Superior in England, but Aquaviva gently told him that his experience and skill were too valuable. Caraman highlights the loneliness of both men as they travelled separately about England and their letters to Aquaviva in Rome were one of their (dangerous) ways of reaching out to let the Jesuit community know what they were accomplishing.

Caraman's description of Southwell's three years of captivity and torture is riveting and his account of Southwell's trial is dramatic and gripping. The sequel to this book would be Caraman's Henry Garnett and the Gunpowder Plot. This book ends with Southwell's execution and Garnett's reactions and his efforts to continue the mission.
Posted by Stephanie A. Mann at 2:13 AM