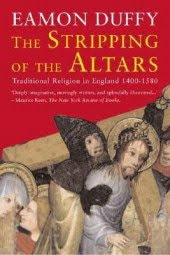 The Maundy of Maundy Thursday comes from the Mandatum, the new commandment Jesus gave his Apostles after washing their feet at the Last Supper--love one another as I have loved you. The ceremonial re-enactment of Jesus' humility was not part of the parish celebration of Holy Thursday in Pre-Reformation England. It was performed at monasteries and abbeys, and by the monarch, but not at the parish church.

On Holy Thursday or Maundy Thursday, the monarchs of England used to wash the feet of twelve poor people in imitation of Jesus at the Last Supper, and then give the poor people money and food. The last monarch to perform this ceremony of humility was King James II. William and Mary turned the duty over to their Almoner, the official in charge of charity, and now Queen Elizabeth II hands out Maundy Money as the Royal Mint explains.

After Mass on Maundy Thursday, all the altars were stripped, washed with water and wine, and scrubbed with sticks--certainly gestures filled with meaning. Jesus was stripped before the Crucifixion, water and blood, representing the Eucharistic water and wine, poured from his side when pierced by the lance, and the sticks represented the scourges. The section on the celebration of Holy Week in Eamon Duffy's The Stripping of the Altars is, to me, an entirely convincing demonstration of the focus of Catholics in England before the destruction of these ceremonies on the reality of Redemption and devotion to Jesus Christ. It was part of peoples' lives--every gesture, every ritual meant something and made the events of that Holy Week present to them.

I will post on the second day of the Holy Triduum, Good Friday, tomorrow. The Easter Vigil on Holy Saturday at that time, unfortunately, was held too early in the day to be the Great Vigil of the Early Church, restored to its proper place in modern times. Several years ago at our parish church the Easter Vigil was conducted in total darkness, as the power failed--the lights of the elects' candles and the Easter Candle ("Christ our Light") were very effective. Then just as we reached the Gloria, the power came back on and--let there be light!! Perfect timing.
Posted by Stephanie A. Mann at 2:10 AM