Something Cromwell and the Court of Augmentations Missed 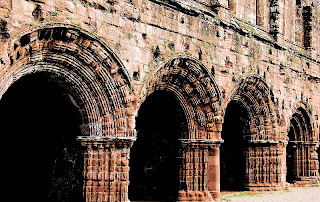 Furness Abbey was the second richest monastery in 16th century England when Thomas Cromwell, Henry VIII's Vicar in Spiritual Matters, targeted it and the other large monasteries for dissolution. Cromwell and his official Commissioners would be very disappointed to learn that they really missed something: the grave of an earlier abbot containing great treasure. That grave was recently discovered and more investigation is planned to date the abbot and possibly identify him. The UK's Guardian and Daily Mail have both run stories on this recent find, accessed during some repairs to the ruined abbey. From The Daily Mail: :

For something like seven centuries he had lain undisturbed.
He – or at least his remains – survived Henry VIII’s destruction of his abbey in 1537, eluded the grave-robbers that followed, and avoided discovery by Victorian archaeologists.
Even deep excavations and the underpinning of the crumbling building in the 1930s failed to unearth him.
But the abbot who headed Britain’s second richest and most powerful Cistercian monastery may soon be unmasked – along with the identity, perhaps, of one of the site’s ghosts.

Furness Abbey is part of the English Heritage program and it costs you about four pounds to visit it today. It was "voluntarily" surrendered in 1537, ahead of the suppression of most of the major monasteries, because some of its monks had been involved in the Pilgrimage of Grace. Roger Pele was its last abbot.

The treasures buried with this abbot are the elaborate head of his crozier and his ring. From The Guardian:

The crozier is unusual and the first to be excavated in this country for 50 years. It has a central gilded silver plaque which shows the archangel Michael slaying a dragon with his sword.
The ring – quite large, probably for a man with big or chubby fingers – is likely to have been given to the abbot on his consecration. "It is an unusual ring," said Harrison. "The bezel is a pyramid shape and is pointed – it would stick in to your finger. You would have felt it when you wore it and it might have been a reminder of the piety of the office."

Estimates currently date his burial from 1350 to 1500, so he could be one of these men:

(Image source: wikipedia commons)
Posted by Stephanie A. Mann at 2:11 AM