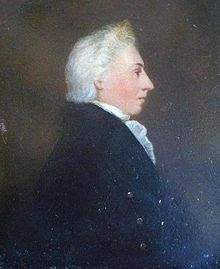 George Haydock was born on April 11, 1774 in Cottam, Lancashire. His parents were George and Anne (Cottam) Haydock--he and his father were named for Blessed George Haydock, who was martyred in 1584 on 12 February with four other Catholic priests.

George's eldest brother James (1765-1809) became a priest and died while caring for his congregation during a plague; his older brother Thomas (1772-1859) became a publisher of Catholic books, including the Haydock Bible; and his sister Margaret became an Augustinian nun.

George studied first at Mowbreck Hall, Wesham and then at Douai, escaping from France in 1793 when Great Britain declared war against France. He resumed his seminary studies at Crook Hall in County Durham two years before his ordination in 1798. After remaining at Crook Hall until 1803 as a professor, he was assigned to a poor parish in Ugthorpe in Yorkshire, former home of Blessed Nicholas Postgate, Popish Plot martyr, where he worked on a commentary for a new edition of Catholic English translation of the Holy Bible, the Douai-Rheims Bible. His brother Thomas published it, starting in 1811--the Haydock Bible.

According to the Catholic Encyclopedia, Father Haydock ran into some trouble at his next assignment in July, 1816 to

the mission of Whitby, whence he was removed on 22 September, 1830, to the mission at Westby Hall, Lancashire, owing to a misunderstanding with his superiors. On 19 August, 1831, he was forbidden to say Mass by Bishop Penswick, whereupon he retired for the succeeding eight years to the Tagg, devoting himself to study. In 1832 he twice appealed to the Propaganda, but both his letters were intercepted and sent to the bishop; after his third appeal in 1838, his faculties were restored on 18 November, 1839, and he was appointed to the mission at Penrith where he spent his last ten years. Father Haydock's chief publication was a new edition of the English translation of the Latin Vulgate first published at Reims in 1582, and at Douai in 1609; Bishop Challoner's text of 1750 was the basis of the work, but in the New Testament Dr. Troy's edition of 1794 is largely followed. The notes are partly original, partly selected from other writers, those on the New Testament not having been compiled by Father Haydock. The edition appeared in Manchester, 1812-14; Dublin, 1812-13; Edinburgh and Dublin, 1845-8; New York, 1852-6. The other works published by Father Haydock are: "The Tree of Life; or the One Church of God from Adam until the 19th or 58th century" (Manchester, 1809); "Prayers before and after Mass proper for Country Congregations" (York, 1822); "A Key to the Roman Catholic Office" (Whitby, 1823); "A Collection of Catholic Hymns" (York, 1823); "Method of Sanctifying the Sabbath Days" (York, 1824).

The Haydock Bible was very popular and became a bestseller in England and in its American edition, published by Eugene Cummiskey of Philadelphia in 1823 to 1825. This wikipedia article contains details about different revisions and editions through the years after Haydock's death.

Here's a sample from the Introduction to the Letter of St. James:

The seven following Epistles have been called Catholic or general, not being addressed to any particular Church or person, if we except the Second and Third of St. John. They are called also Canonical, having been received by the Church as part of the canon of the New Testament, and as writings of divine authority. It is a matter of fact allowed by every one, that five of these epistles, to wit, this of St. James, the Second of St. Peter, the Second and Third of St. John, that of St. Jude, as also the Epistle of St. Paul to the Hebrews, and the Apocalypse or Revelation of St. John, were doubted of , and not received always and every where in the three first ages[centuries], till the canon and catalogue of Scripture books was examined by tradition, and determined by the authority of the Catholic Church, the supreme judge of all controversies in matters of faith and religion, according to the appointment of our Saviour, Christ, expressed in many places in the holy Scriptures. But I could never learn upon what grounds they who deny the Catholic Church and General Councils to be of an infallible authority, and who deny Christ's promises to guide his Church in all truth to the end of the world, can be certain which Scriptures or writings are canonical, and which are not. I could never understand what construction to put on the sixth of the Thirty-nine Articles of Religion of the Church of England. We there meet with this declaration: In, or by the name of the holy Scripture, we understand those canonical books of the Old and New Testament of whose authority was never any doubt in the Church. These I have mentioned were certainly for some time doubted of; they are still doubted of by some of the late reformers: Luther, the great doctor of the reformation, is not ashamed to say that this epistle of St. James is no better than straw, and unworthy of an apostle. These writings therefore, according to the said declaration, ought not to be accounted and received as canonical; and yet before the end of the said sixth article, it is again declared, that all the books of the Old and New Testament, as they are commonly received, we do receive and account canonical. And in all New Testaments of the Church of England, all these are received for canonical in the same manner as the four gospels, without any remark or advertisement to the contrary. --- The first of the seven epistles was written by St. James, surnamed the lesser, and James of Alpheus, (Matthew x. 3.) one of the twelve apostles, called the brother of our Lord, (Galatians i. 19.) who was made bishop of Jerusalem. His mother is thought to have been Mary, sister to the blessed Virgin Mary, and to have been married first to Alpheus, and afterwards to Cleophas; to have had four sons, James, Joseph, Simon, (or Simeon) and Jude, the author of the last of these epistles. All these four being cousins-german, are called brothers of our Lord, Matthew xiii. 55. How great a veneration the Jews themselves had for this apostle and bishop of Jerusalem, see not only Hegisippus apud Eusebius, lib. ii. hist. chap. 23. and St. Jerome de viris illustribus, also the same St. Jerome in Galatians i. 19. (tom. iv, p. 237, lib. 1. contra Jovin. tom. iv, part 2, p. 182.) but even Josephus, (lib. xxviii. Jewish Antiquities, chap. 8.) where he calls him the brother of Jesus, surnamed the Christ. This epistle was written about the year 62.[A.D. 62.] The chief contents are: 1. To shew that faith without good works will not save a man, as St. Augustine observed, lib. de fid. et oper. chap. iv.; 2. He exhorts them to patience, to beg true wisdom, and the divine grace; 3. He condemns the vices of the tongue; 4. He gives admonitions against pride, vanity, ambition, &c. 5. To resist their disorderly lusts and desires, which are the occasions and causes of sin, and not Almighty God; 6. He publisheth the sacrament of anointing the sick with oil; 7. He recommends prayer, &c.

Here is a link to St. Catherines RC Church in Penrith.
Posted by Stephanie A. Mann at 2:09 AM