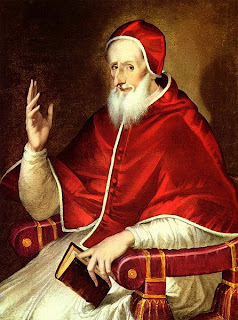 April 30th is the Memorial of Pope St. Pius V (1504 to 1572) who was elected pope in 1566. He was certainly a great reformer pope, implementing the program of the Council of Trent, naming St. Thomas Aquinas a Doctor of the Church, and working to protect and aid the poor.

In 1570 he issued the Bull "Regnans in Excelsis" at the urging of Cardinal Allen and Father Robert Parsons, SJ to excommunicate Elizabeth I of England and release Catholics in England from loyalty to her as queen. The Bull might have supported the Northern Rebellions in 1569 and 1570 to rally more Catholics to the effort, but it came too late--after Elizabeth had defeated the rebels. After its issue, Elizabeth and Parliament passed more and more strict recusancy laws as English Catholic priests returned from exile (after preparation and ordination in Douai, Rome or Vallidolid as described in the series of posts this week) and Catholics continued to remain true to the ancient faith.

The next year, however, Pope Pius was more successful in forming the alliance between Spain and Venice which led to the October 7, 1571 victory over the Turks in the great naval battle of Lepanto. He then instituted the feast of Our Lady of Victory, now called Our Lady of the Rosary.
In his biography of St. Edmund Campion, Evelyn Waugh discussed that Papal Bull and whether Pope Saint Pius V had made a strategic error in issuing it, according to this website:

Reflecting upon the mysterious and very consequential decision which had been made ten years earlier (in 1570) by the sainted Dominican Pope Pius V, namely, to promulgate on Corpus Christi Day (25 May 1570) the Bull of Elizabeth’s Excommunication and Deposition (Regnans in Excelsis), Evelyn Waugh posed an important question, and with great humility:

Had he [Pope Pius V], perhaps, in those withdrawn, exalted hours before his crucifix, learned something that was hidden from the statesmen of his time and the succeeding generations of historians [who acutely criticized him for his act]; [had he] seen through and beyond the present and the immediate future [e.g., the October 1571 Battle of Lepanto!]; [had he] understood that there was no easy way of reconciliation, but that it was only through blood and hatred and derision that the faith was one day to return to England?[20]
Waugh shows a heart and a humility for this great Dominican Pope despite the manifold, “learned and prudent” criticisms against his Bull of Excommunication and Deposition. Waugh, then says, once again with a supernatural perspective:

It is possible that one of his more worldly predecessors [as Pope] might have acted differently, or at another season, but it was the pride and slight embarrassment of the Church that, as has happened from time to time in her history, the See of Peter was at this moment occupied by a Saint.[21]

His contemporaries and the vast majority of subsequent historians regarded the Pope’s action as ill-judged. It has been represented as a gesture of mediaevalism, futile in an age of new, vigorous nationalism, and its author as an ineffectual and deluded champion [like a Don Quixote], stumbling through the mists, in the ill-fitting, antiquated armour of Gregory [VII] and Innocent [III]; a disastrous figure, provoking instead of a few buffets for Sancho Panza the bloody ruin of English Catholicism.[22]

Waugh’s own artfully ironic description of Saint Pius V’s scoffers shows the depth of his own vision and Faith; and he truly tries to understand the Pope’s deeper reasons and motives:

Pius contemplated only the abiding, abstract principles that lay behind the phantasmagoric changes of human affairs. He prayed earnestly about the situation in England, and saw it with complete clarity; it was a question [a quaestio disputata] that admitted of no doubt whatever. Elizabeth was illegitimate by birth, she had violated her [Catholic] coronation oath, deposed her [Catholic] bishops, issued a heretical Prayer Book and forbidden her subjects the comfort of the sacraments. No honourable Catholic could be expected to obey her.[23]
Posted by Stephanie A. Mann at 2:10 AM