Blessed James Bell: Priest and martyr, b. at Warrington in Lancashire, England, probably about 1520; d. 20 April, 1584. For the little known of him we depend on the account published four years after his death by Bridgewater in his "Concertatio" (1588), and derived from a manuscript which was kept at Douay when Challoner wrote his "Missionary Priests" in 1741, and is now in the Westminster Diocesan Archives. A few further details were collected by Challoner, and others are supplied by the State Papers. Having studied at Oxford he was ordained priest in Mary's reign, but unfortunately conformed to the established Church under Elizabeth, and according to the Douay manuscript "ministered their bare few sacraments about 20 years in diverse places of England". Finally deterred by conscience from the cure of souls and reduced to destitution, he sought a small readership as a bare subsistence. To obtain this he approached the patron's wife, a Catholic lady, who induced him to be reconciled to the Church. After some time he was allowed to resume priestly functions, and for two years devoted himself to arduous missionary labours. He was at length apprehended (17 January 1583-84) and, having confessed his priesthood, was arraigned at Manchester Quarter-Sessions held during the same month, and sent for trial at Lancaster Assizes in March. When condemned and sentenced he said to the Judge: "I beg your Lordship would add to the sentence that my lips and the tops of my fingers may be cut off, for having sworn and subscribed to the articles of heretics contrary both to my conscience and to God's Truth". He spent that night in prayer and on the following day was hanged and quartered together with Blessed John Finch, a layman, 20 April, 1584.

Blessed John Finch: A martyr, b. about 1548; d. 20 April, 1584. He was a yeoman of Eccleston, Lancashire, and a member of a well-known old Catholic family, but he appears to have been brought up in schism. When he was twenty years old he went to London where he spent nearly a year with some cousins at Inner Temple. While there he was forcibly struck by the contrast between Protestantism and Catholicism in practice and determined to lead a Catholic life. Failing to find advancement in London he returned to Lancashire where he was reconciled to Catholic Church. He then married and settled down, his house becoming a centre of missionary work, he himself harbouring priests and aiding them in every way, besides acting as catechist. His zeal drew on him the hostility of the authorities, and at Christmas, 1581, he was entrapped into bringing a priest, George Ostliffe, to a place where both were apprehended. It was given out that Finch, having betrayed the priest and other Catholics, had taken refuge with the Earl of Derby, but in fact, he was kept in the earl's house as a prisoner, sometimes tortured and sometimes bribed in order to pervert him and induce him to give information. This failing, he was removed to the Fleet prison at Manchester and afterwards to the House of Correction. 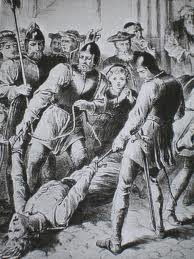 When he refused to go to the Protestant church he was dragged there by the feet, his head beating on the stones. For many months he lay in a damp dungeon, ill-fed and ill-treated, desiring always that he might be brought to trial and martyrdom. After three years' imprisonment, he was sent to be tried at Lancaster. There he was brought to trial with three priests on 18 April, 1584. He was found guilty and, 20 April, having spent the night in converting some condemned felons, he suffered with Ven. James Bell at Lancaster. The cause of his beatification with those of the other English Martyrs was introduced by decree of the Sacred Congregation of Rites, 4 Dec., 1886.