Oh, They Built the Ship Titanic to Sail the Ocean Blue 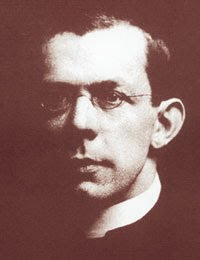 On this centenary of the sinking of the Titanic, it's appropriate to remember the Catholic priests who stayed on board to help the "anxious passengers", as Our Sunday Visitor's April 15 issue features them. One of the three priests has an Oxford/Oxford Movement connection:

Father Thomas Roussel Davids Byles, 42, came from a prominent family in England and was the son of a Congregationalist minister. While at Oxford, he was received into the Church of England. Originally intending to become an Anglican priest, he converted to Catholicism in 1894 and was ordained a Catholic priest in 1902. . . .

Most third-class passengers were immigrants to America, mainly from Ireland, so they would have understood English. Many others, however, were from continental Europe. Father Byles preached his third-class homily in English and French, and Father Peruschitz followed with a sermon in German and Hungarian. According to a newspaper report at the time, both priests preached about “the necessity of man having a lifeboat in the shape of religious consolation at hand in case of a spiritual shipwreck.”

When the collision with the iceberg came, Father Byles returned to third-class cabins. Survivors recall that he pointed third-class passengers to exits from lower decks or into the boats. He heard confessions. He prayed with anxious passengers.

According to newspaper reports, Father Byles too was offered a seat in a departing lifeboat, but he refused to leave the other passengers. He died with the ship and his body was never recovered.

A memorial to Father Byles was erected at his parish in Chipping Ongar, Essex, England, St. Helen's.

Here's more about Father Byles from a Titanic website! And BBC News has a story with pictures of the parish church.
Posted by Stephanie A. Mann at 2:15 AM

Email ThisBlogThis!Share to TwitterShare to FacebookShare to Pinterest
Labels: catholic converts, the Oxford Movement, the Titanic