Which Earl Was Which? 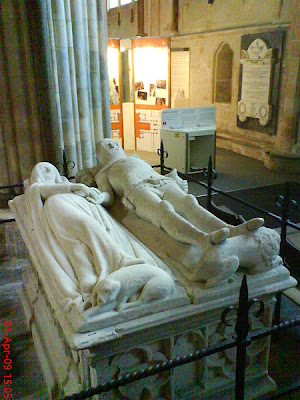 [Image source: Attribution: Nabokov at en.wikipedia] The WSJ has this review of a volume of Philip Larkin's poetry ("What Will Survive of Us") with a close-up of the tomb of Richard Fitzalan, the Tenth Earl of Arundel. But the cutline says "ETERNAL BOND | A detail (above) of the tomb of the 13th Earl of Arundel (ca. 1307-76) and his second countess, Eleanor (1318-1372), in Chichester Cathedral. The sculpture is the subject of Larkin's 1956 poem 'An Arundel Tomb.'" When I looked up Chichester Cathedral, web sources stated that the Fitzalan Arundel in the tomb was the 10th Earl of Arundel, so I began to wonder. I wondered even more when other sources called Richard Fitzalan the 3rd Earl of Arundel. Also, sometimes St. Philip Howard is referred to as the 13th Earl of Arundel (Arundel Castle's website does). I think the confusion comes from the different creations of the Earldom, as illustrated by this wikipedia entry--there are Fitzalan Earls, Howard Earls, and Norfolk Earls. Also, when a Fitzalan backed the wrong side in a rebellion (as Richard's son Richard did in 1397 against Richard II), the title would be forfeit until restored. St. Philip Howard's title was forfeit to Queen Elizabeth I and restored to his son under James I.

At any rate, here is the poem the photo illustrates, "An Arundel Tomb" by Philip Larkin:

Side by side, their faces blurred,
The earl and countess lie in stone,
Their proper habits vaguely shown
As jointed armour, stiffened pleat,
And that faint hint of the absurd—
The little dogs under their feet.

Such plainness of the pre-baroque
Hardly involves the eye, until
It meets his left-hand gauntlet
Clasped empty in the other; and
One sees, with a sharp tender shock,
His hand withdrawn, holding her hand.

They would not think to lie so long.
Such faithfulness in effigy
Was just a detail friends would see:
A sculptor’s sweet commissioned grace
Thrown off in helping to prolong
The Latin names around the base.

They would not guess how early in
Their supine stationary voyage
The air would change to soundless damage,
Turn the old tenantry away;
How soon succeeding eyes begin
To look, not read. Rigidly they

Persisted, linked, through lengths and breadths
Of time. Snow fell, undated. Light
Each summer thronged the glass. A bright
Litter of birdcalls strewed the same
Bone-riddled ground. And up the paths
The endless altered people came,

Washing at their identity.
Now, helpless in the hollow of
An unarmorial age, a trough
Of smoke in slow suspended skeins
Above their scrap of history,
Only an attitude remains:

Time has transfigured them into
Untruth. The stone fidelity
They hardly meant has come to be
Their final blazon, and to prove
Our almost-instinct almost true:
What will survive of us is love.
Posted by Stephanie A. Mann at 2:10 AM