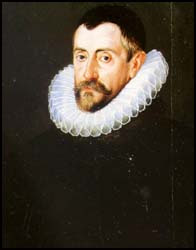 Francis Walsingham, Principal Secretary to Elizabeth I, died April 6, 1590. According to this website:

His devotion to Protestantism made him feverishly alive to the perils which threatened the Reformation; and he took an alarmist view of every situation. Ever dreading a blow, he was always eager to strike the first; and alive to the perils of peace, he was blind to the dangers of war. He supplied the momentum which was necessary to counteract the caution of Burghley and Elizabeth; but it was probably fortunate that his headstrong counsels were generally overruled by the circumspection of his sovereign. He would have plunged England into war with Spain in 1572, when the risks would have been infinitely greater than in 1588, and when the Huguenot influence over the French government, on which he relied for support, would probably have broken in his hands. His clear-cut, strenuous policy of open hostilities has always had its admirers; but it is difficult to see how England could have secured from it more than she actually did from Elizabeth's more Fabian tactics. War, declared before England had gained the naval experience and wealth of the next fifteen years, and before Spain had been weakened by the struggle in the Netherlands and the depredations of the sea-rovers, would have been a desperate expedient; and the ideas that any action on Elizabeth's part could have made France Huguenot, or prevented the disruption of the Netherlands, may be dismissed as the idle dreams of Protestant enthusiasts.

That all may be true, but he also thought that Elizabethan policy toward the Catholic priests, including Topcliffe's tortures and the brutal executions, was sometimes counterproductive because it was producing martyrs and inspiring the Catholic community. He thought that he had a much more effective way of discovering plots and dealing with any dangers Catholics might pose:

For the rest of his life Walsingham was mainly occupied in detecting and frustrating the various plots formed against Elizabeth's life; and herein he achieved a success denied him in his foreign policy. He raised the English system of secret intelligence to a high degree of efficiency. At one time he is said to have had in his pay fifty-three agents at foreign courts, besides eighteen persons whose functions were even more obscure. Some of them were double spies, sold to both parties, whose real sentiments are still conjectural; but Walsingham was more successful in seducing Catholic spies than his antagonists were in seducing Protestant spies, and most of his information came from Catholics who betrayed one another. In his office in London men were trained in the arts of deciphering correspondence, feigning handwriting, and of breaking and repairing seals in such a way as to avoid detection. His spies were naturally doubtful characters, because the profession does not attract honest men; morality of methods can no more be expected from counterplotters than from plotters; and the prevalence of political or religious assassination made counterplot a necessity in the interests of the state.

In the case of Mary, Queen of Scots, Walsingham may have gone too far and engaged in not only entrapment of that queen but misleading and deceiving his own queen:

The most famous of the plots frustrated by Walsingham was Anthony Babington's, which he detected in 1586. Of the guilt of the main conspirators there is no doubt, but the complicity of Mary Stuart has been hotly disputed. Walsingham had long been convinced, like parliament and the majority of Englishmen, of the necessity of removing Mary; but it was only the discovery of Babington's plot that enabled him to bring pressure enough to bear upon Elizabeth to ensure Mary's execution. This circumstance has naturally led to the theory that he concocted, if not the plot, at least the proofs of Mary's connivance. Undoubtedly he facilitated her self-incrimination, but of her active encouragement of the plot there can be little doubt after the publication of her letters to Mendoza, in which she excuses her complicity on the plea that no other means were left to secure her liberation. Considering the part he played in this transaction, Walsingham was fortunate to escape the fate which the queen with calculated indignation inflicted upon Davison.

Davison was the unfortunate courtier who actually delivered Elizabeth's signed order for Mary's execution. He ended up in the Tower of London for a time. I happened to see just a few minutes of Geoffrey Rush playing Walsingham in the wildly historically inaccurate movie Elizabeth. Just a few minutes was enough. Walsingham has been the subject of several biographies lately, by Robert Hutchinson, Derek Wilson, Stephen Budiansky, Alan Haynes and John Cooper. Here is a review of the last author's book, The Queen's Agent: Francis Walsingham at the Court of Elizabeth I (Faber & Faber, 2011). [Thanks to Elena Maria Vidal at Tea at Trianon.]
Posted by Stephanie A. Mann at 2:04 AM