Another title from the Institute of Jesuit Sources--I can certainly recommend their processing and quick delivery if you are interested in their publications: 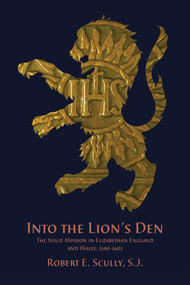 Into the Lion's Den by Robert E. Scully, SJ vividly tells the story of the Jesuit mission to England and Wales from its beginning in 1580 to the death of Elizabeth I in 1603. This endeavor was to be filled not only with hope and daring but also with fear and danger, as Edmund Campion, Robert Persons, and Ralph Emerson found out after they landed in England in June 1580 and as their successors were also to learn in the ensuing years.

In the context of the religious and political backgrounds of the times the mission was organized and launched, and carried on its work, often in clandestine ministries. Two special characteristics of the work are for the first time highlighted here, the unique challenges and opportunities of ministry in wales and the indispensable role of the Elizabethan Catholic women in sustaining the Jesuits and the seminary priests and the larger Catholic community. Differences of outlook, strategy and circumstances between the Jesuits and the other Catholic clergy and religious orders sometimes contributed to a house divided. But ever present were the realities of persecution and prison, exile and execution as the Elizabethan government exerted all its power to thwart Jesuit efforts.

In the end, those heroic efforts, the Jesuit organizational structure and spiritual vision that undergirded them, and the crucial support of the men and women who shared in those efforts helped to ensure the survival of a tenacious and resilient Catholic community.

Father Scully's style is clear and his narrative comprehensive. He effectively outlines the progress of the Jesuit mission to England and devotes a chapter to their efforts in Wales. I'll post a full review soon.
Posted by Stephanie A. Mann at 2:12 AM