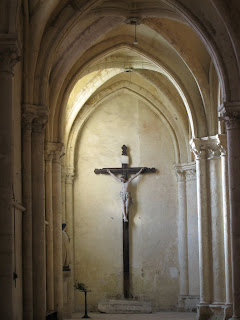 As Eamon Duffy describes in The Stripping of the Altars, Good Friday was a solemn day of fasting and mourning in English Catholic churches before the English Reformation. The sacramental reality of Jesus's redemptive suffering and death were commemorated by the ritual of "Creeping to the Cross" which compares to our current form of Venerating the Cross as one of the four parts of the Good Friday service. There is no Mass celebrated on Good Friday. We read the Passion of Our Lord Jesus Christ from St. John's Gospel, offer sung Petitions, Venerate the Cross and receive the Pre-Sanctified Communion, reserved from Thursday's celebration of the Lord's Supper. We enter in silence and depart in silence, but during the Veneration, we hear the Improperia or the Reproaches as we venerate the Cross.

My people, what have I done to you? How have I offended you? Answer me.
I led you out of Egypt, from slavery to freedom, but you led your Saviour to the cross.
Holy is God! Holy and Strong! Holy immortal One, have mercy on us.

As this website notes, Henry VIII allowed the performance of this ritual throughout his "rule" as Supreme Head and Governor of the Church in England, but wanted to make sure that no one celebrated it, and other observances, out of superstition:

"Holy water, holy bread, the use of vestments, Candlemas candles, ashes, palms, creeping to the Cross, sepulchres, hallowing of the font, and “all other like laudable customs, rites, and ceremonies” were allowed by the Ten Articles of 1536 “as good and laudable things to put us in memory of what they signify.” On February 26, 1539 (Wilkins, III, 842), Henry issued a proclamation in which holy water, holy bread, kneeling and creeping to the Cross on Good Friday, setting up lights before the Corpus Christi on Easter Day, bearing candles at the Purification were allowed since “as yet” they had not being abolished. But they were to be used without superstition. “Let the minister on each day instruct the people on the right and godly use of every ceremony. On every Sunday let him declare that holy water is sprinkled in remembrance of our baptism and of the sprinkling of the blood of Christ. On every Sunday let holy bread be given, to remind men of the housel, or Eucharist, which in the beginning of the Christian Church was received more often than now, and in sign of unity, for as the bread is made of many grains so are all Christian men one mystical body of Christ. Let candles be borne at Candlemas, but in memory of Christ, the spiritual light. On Ash Wednesday let ashes be given to every Christian man to remind him that he is dust and ashes. On Palm Sunday let palms be borne, but let it be declared that it is in memory of Christ’s entry into Jerusalem. Let it be declared on Good Friday, that creeping to the Cross and kissing the Cross signify humility and the memory of our redemption. They are signs and tokens, not the workers nor the works, of our salvation”. This explanation is almost identical to No. IX of the Ten Articles (1536). The same ordinances concerning ceremonies were embodied in some royal directions which appeared on Nov. 10, 1539. In January, 1545-46, Cranmer prepared letters for the King, which however never received Henry’s signature, abrogating creeping and kneeling to the Cross (Cranmer, Remains. p. 415). The Royal Injunctions of 1547 (No. 27) tolerated holy water, holy-bread and palms, did not condemn ashes, Candlemas candles, creeping to the Cross, Easter sepulchres, hallowing of the font, and allowed two lights; although the Homily of Good Works published before them and ordered by them to be read, condemned fire, bread, water, palms and candles.

During the reign of Edward VI, Archbishop Cranmer's Book of Common Prayer omitted the ceremony and Parliament forbade it. Mary I's restoration of Catholicism revived the practice which then was forbidden again under Elizabeth I. To me, it represents great devotion to Jesus and the Paschal Mystery and acknowledgment of sin and penitence--not something you would want to condemn at all. People did not want to give it up, either, and Anglican bishops complained that some still "creeped" on their knees to the Cross on Good Friday during Elizabeth's reign.

Here's a nice bonus: the Magnificat monthly prayer book has made a digital copy of their Holy Week issue avaialable on line for free! The Hymn of the Month (Week in this case) is the Sarum Processional for the Veneration of the Cross, "Dum Fabricator Mundi" ("When the Maker of the World").
Posted by Stephanie A. Mann at 2:06 AM