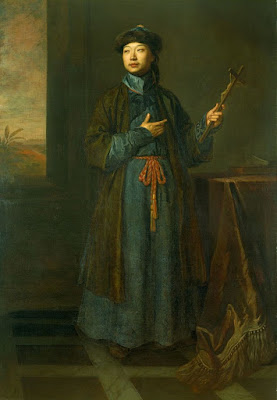 Godfrey Kneller, the great portrait painter of the Stuart Courts from the reign of Charles II to Anne and of the first Hanoverian Court of George I, was born on August 8, 1646 and died on October 19, 1723.

He painted portraits of kings, queens, members of the Kit-Cat Club, the Hampton Court Beauties, John Locke, and Isaac Newton. He also painted the portrait of the Chinese convert to Catholicism, Michael Alphonsus Shen Fuzong who was visiting England during a tour of Europe with the Flemish Jesuit Father Couplet. He called this painting "The Chinese Convert".

Jonathan Spence described the occasion of this painting in a 2010 Jefferson Lecture in the Humanities for the NEH:

. . . sometime during that spring or summer of 1687 Shen Fuzong had his portrait painted. . . . This was not just a casual venture by an unknown artist: it was a full-length portrait by one of the best-known and most fashionable portraitists of the day, Godfrey Kneller, soon to be knighted and already celebrated as a painter both of the English royal family, and of many leading aristocrats of the day. Kneller portraits did not come cheap, and the painter’s own surviving account books from the time show him receiving between thirty-five and forty pounds sterling for a full-length portrait such as this one. (Three-quarter length and bust length portraits were cheaper, depending on the exact square footage.) According to those who knew Kneller, this was the painting of his of which he was the proudest, and in retrospect it gains additional value as the first detailed portrayal ever made of a Chinese in England. It is startling both in its pose and in its clarity. Shen is shown holding a crucifix in his left hand, and gesturing toward it with his right, even as he looks up and past the viewer to some distant horizon, with his face (beneath a fur hat) and his hands shining in the light of dawn. Shen’s attire is an unusual mixture of styles and fabrics, part Chinese and part Western. He stands on a marble floor, with the view to a distant tropical countryside opening out through the open window behind him. On the lavishly fringed table covering, just touched by the light, is a leather-bound book that we might guess is the newly published Confucius volume, fresh from the Paris press.

Who commissioned this painting, and exactly when and where did Kneller create it? Was it a gift? If so, from whom? Could it have been commissioned by King James II himself? (That is not totally far-fetched, since on one occasion James sent Kneller to make a portrait of King Louis in France.) Or did the idea come from one of the prominent Catholic families, or from the newly appointed papal legate sent to London from Rome? Or from the Jesuit priests who could once again worship openly in post-Reformation England, now that the King, James II, was proclaimed as a Catholic monarch, and was taking the initiative in funding or reestablishing schools, hospitals and beautifully decorated chapels for the Catholic congregations? There were many people eager to salute the King for righting what they believed to be past wrongs, and for seeking to bring Catholics back to many public positions, from posts in the treasury to the masterships and fellowships of Oxford and Cambridge colleges. Was Shen’s portrait, in this particular religious and political context, seen as the symbol of a new dawn for the Catholic faith, of which the mission to China was a manifestation? There seems no doubt that King James took a kind of proprietary interest in the painting and made sure that others knew of the pleasure it gave him. In a visit to Oxford in early September 1687, King James summoned [Thomas] Hyde from his desk in the Bodleian and asked him specifically if he knew this Chinese man, and to tell Hyde that he had Shen’s “picture to the life hanging in his roome, next to the bed chamber.” Hyde told the King that he not only knew Shen but that he personally “learned many things of him.”

Shen Fuzong left England in 1688 (good timing as Spence notes: "just before King James II was driven from his throne to permanent exile in France by his anti-Catholic political and religious enemies"), became a Jesuit priest in Lisbon and died on his way home to China in September 1691 of a fever near Mozambique. The portrait is part of the Royal Collections in England--I think the exiled King James II would have liked to have it with him in France.

Image Credit (Public Domain)
Posted by Stephanie A. Mann at 12:00 AM