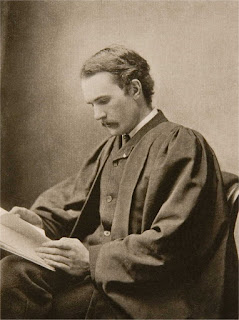 Seeing Gilbert Murray's name as one of the editors of Chesterton's book on the English literature of the Victorian Age, I looked him up. In addition to being the Regius Professor Greek at the University of Oxford, he translated many Greek plays, wrote many other books on classical and other topics, and was an internationally known Humanist, even participating in the League of Nations.

Looking him up, I found out about his daughter, Rosalind, who was born in 1890,  married the historian Arnold Toynbee in 1913, converted to Catholicism in 1933, divorced Toynbee in 1946, and never remarried. She began her literary career as a novelist starting with The Leading Note in 1910 and then, after her conversion, began to write Catholic apologetical works: The Good Pagan's Failure (1939), Time and the Timeless (1942), The Life of Faith (1943), The Forsaken Fountain (1948) and The Further Journey: In My End Is My Beginning (1953). She died in 1967.

Persephone Books publishes one of her novels, The Happy Tree, which I plan to order soon:

This 1926 novel begins with the death of a young man during the war, flashes back to his happy childhood shared with the young woman who is the narrator, and then describes how the war – inevitably – took them unawares, destroyed their happiness and has left her, the young woman, emotionally maimed. In one sense it does not sound very entertaining. But the quality of the writing is extraordinary and it tells the reader as much about the after-shock of the war as, say, Testament of Youth [by Vera Brittain].

Persephone Books also provides a biography and a photo of young Rosalind.

The rest of her books, especially the books she wrote after her conversion, are out of print and hard to find. But The Good Pagan's Failure seems to have found some new readers lately. Most recently on the VoegelinView website:

No one today knows Murray’s name but in her lifetime she wrote steadily, sustained an audience, and garnered the attention of literary critics. In her later career she sidelined herself as a fiction-writer and devoted her productivity to religious non-fiction. She produced the first fruit of this authorial metamorphosis in 1939 under the heavily laden title The Good Pagan’s Failure. No doubt but that the coinage of “the Good Pagan” implies close personal relations, touching on both her father and her husband, but the book never mentions either. In it, rather, the formula denotes the modern, upper-class humanist whose sincere good intentions center on building up a global regime of justice and equality, but who, at the same time, rejects any concept of God and assumes a stance, sometimes dissimulated, that is hostile to religion. . . .

The Good Pagan’s Failure belongs in a genre consolidated by the conservative critics of modernity, especially those who assume a Catholic perspective, as do Jacques Maritain, Simone Weil, Henri de Lubac, and Gabriel Marcel. The cognoscenti will also detect in Murray’s Weltanschauung echoes of José Ortega y Gasset, whose influence on the final section of her study marks itself as indubitable. This spotting of sources by no means suggests a lack of originality, however. It attests, on the contrary, to Murray’s education both broad and deep, her enduring concern for the sinfulness of the modern condition, and her religious conviction, to which she adds the intense personal discoveries that originate in her highly conscious experiences of life – of her milieu in youth and of her thirty-three years of marriage.

And if five years ago still counts as lately, Jude Dougherty, Professor Emeritus in Philosophy at the Catholic University of America, wrote an appreciation of her book in 2015 for The Wanderer:

She was remarkably positioned to know and to assess the mind of what she calls the “Enlightened Pagan.” The book is essentially a critique of the fashionable humanism and liberalism of her day, the epoch of George Bernard Shaw, Bertrand Russell, and G.E. Moore.


It is Rosalind Murray’s contention that the crucial difference which separates and divides us as human beings is, and always must be, spiritual, exemplified by an acceptance or rejection of belief in God. “Our attitude on this fundamental question determines the whole direction of our living in all of its aspects, and in all relations, and that opposition in this one decisive matter implies secondary, but resultant, opposition in outlook and in value throughout our lives.” (2)

Speaking of herself, she writes, “Born and brought up among enlightened Pagans, their outlook and their standard, and their values are those which I first knew, [and] by which I was educated….In maturity, I have found enlightened Paganism inadequate to explain life as I see it, inadequate to deal with it as I find it. The picture presented to me in youth has proved, so it seems to me, a misleading picture, their accounting of existence offered, a false account; the key with which I was furnished unlocks no door.” (3)

In acknowledging her transfer of allegiance, she says, “I retain a deep regard, a very real respect for the good Pagans whom I must now oppose.” (4)

For the footnotes and the rest, please see the article.

Fascinating traces of a forgotten author. The Wikipedia entry for her father contains this intriguing anecdote:

[Gilbert] Murray was baptised as a Roman Catholic; his father [Sir Terence Aubrey Murray] was a Catholic, his mother [Agnes Murray] a Protestant. His daughter Rosalind (later Rosalind Toynbee), a Catholic convert, attacked his secularism in her book of apologetics, The Good Pagan's Failure (1939). About a month before he died, when he was bedridden, his daughter Rosalind called the local Catholic priest to see him.[54] Rosalind subsequently claimed that Murray was then reconciled to the Catholic Church; other family members, however, contested her version of the events.

Perhaps like Lord Marchmain in Brideshead Revisited? Rosalind may have opposed her father's secularism, but she still loved him as a Good Pagan, and wanted the best for him: eternal life and the Beatific Vision!
Posted by Stephanie A. Mann at 12:00 AM