When I see this cover my first thought is that the novel is set in the 18th century and the protagonist is a Jane Austen character: 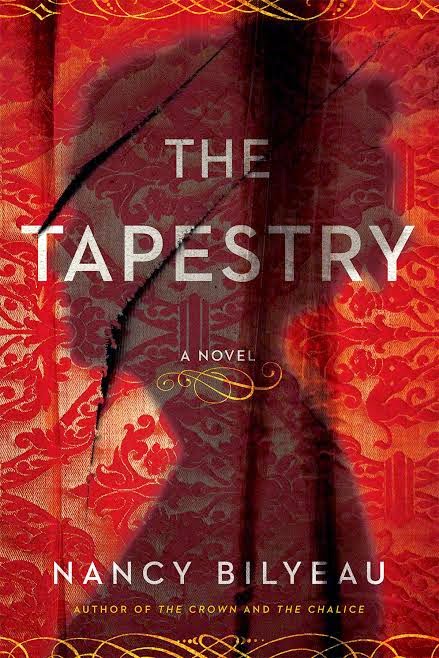 But it's actually the third volume in Nancy Bilyeau's Tudor suspense trilogy:

Welcome to the world of Joanna Stafford, heroine of THE CROWN, THE CHALICE, and the upcoming THE TAPESTRY. The award-winning series takes place in Tudor England, with Joanna, a Dominican novice, struggling to survive the turbulent reign of King Henry VIII.

The trilogy made its debut in 2012 when THE CROWN earned rave reviews and went to No. 1 on Amazon.com. Oprah magazine said, "Bilyeau deftly weaves extensive historical detail throughout, but the real draw of this suspenseful novel is its juicy blend of lust, murder, conspiracy and betrayal."

In 2013 appeared THE CHALICE, revolving around a prophecy-fueled conspiracy against Henry VIII. Parade magazine said "English history buffs and mystery fans alike will revel in this richly detailed sequel." The book won Best Historical Mystery of 2013 from RT Reviewers.

On March 24, 2015, the final book in the historical trilogy will appear. In THE TAPESTRY, Joanna is drawn into the court of the king, becoming closer than ever to her friend Catherine Howard, tangling with Thomas Cromwell and the Duke of Norfolk--and trying to stay one step ahead of a plot against her own life.

Nun or wife, spy or subject, rebel or courtier, Joanna Stafford must finally choose her fate...

When I think of tapestry decoration in the sixteenth century, I think of mille-fleurs in the background: 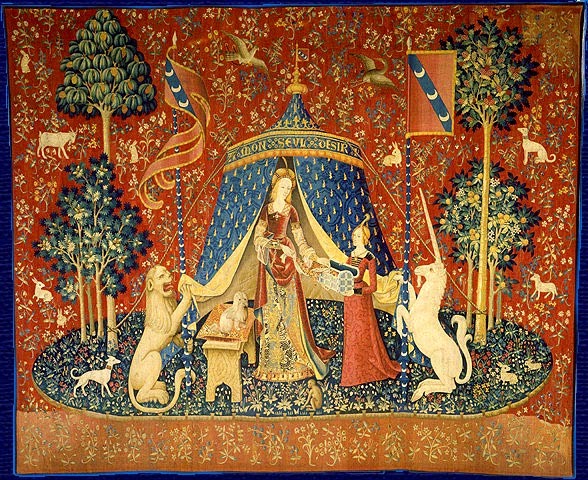 The cover above looks more like a jacquard style pattern. I am certainly no expert in sixteenth century tapestries, but the cover does not seem to fit the era to me. According to the book description above, Joanna Stafford is deep into Henry VIII's reign and I rather presume that the slender neck of the silhouette above is meant to be Catherine Howard's!
Posted by Stephanie A. Mann at 12:30 AM