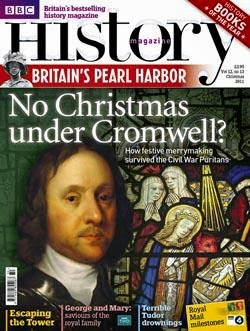 In this Christmas 2011 issue of the BBC History Magazine, Mark Stoyle, Professor of Early Modern History at the University of Southampton, describes how and why the Puritans banned Christmas once they had control of Parliament and how Royalists and others fought the ban:

As the year 1645 limped towards its weary close, a war-torn England shivered beneath a thick blanket of snow. A few months earlier, parliament’s New Model Army, led by Sir Thomas Fairfax and Oliver Cromwell, had routed the forces of Charles I at the battle of Naseby. Although that defeat had struck the king’s cause a mortal blow, the royalists still refused to surrender, and the bloody Civil War which had divided the country ever since 1642 continued to rage.

Under constant pressure from the armies of both sides to supply them with money, clothing and food, few Englishmen and women can have been anticipating a particularly merry Christmas. Yet, for those who lived in the extensive territories which were controlled by the king’s enemies, there was to be no Christmas this year at all – because the traditional festivities had been abolished by order of the two Houses of Parliament sitting at Westminster.

From Charles’s beleaguered wartime capital in Oxford, the royalist satirist John Taylor – by now in his mid-60s, but nevertheless one of the king’s most indefatigable literary champions – issued a cry of anguish at this assault on England’s time-honoured customs. All of the “harmless sports” with which people had long celebrated Christ’s nativity “are now extinct and put out of use… as if they had never been,” Taylor lamented in his pamphlet The Complaint of Christmas, and “thus are the merry lords of misrule suppressed by the mad lords of bad rule at Westminster”.

So why had the parliamentarians decided to wage war on Christmas – and how did those, like Taylor, who were determined to defend the traditional celebrations, fight back?

The attack on the feast of Christmas had deep roots. Long before the Civil War began, many zealous Protestants, or ‘Puritans’, had been troubled both by the boisterous nature of the festivities which took place at Christmas and by the perceived association of those festivities with the old Catholic faith. During the early 1600s, most English Puritans had been prepared to tolerate Christmas. Following the rebellion of the Presbyterian Scots against Charles I in 1637, however, all this was to change.

Read the rest here. There were even riots in protest against the Puritan ban:

Worse was to follow in 1647 – despite the fact that, on 10 June that year, parliament has passed an ordinance which declared the celebration of Christmas to be a punishable offence. On 25 December 1647, there was further trouble at Bury, while pro-Christmas riots also took place at Norwich and Ipswich. During the course of the Ipswich riot, a protestor named ‘Christmas’ was reported to have been slain – a fatality which could be regarded as richly symbolic, of course, of the way that parliament had ‘killed’ Christmas itself.

In London, a crowd of apprentices assembled at Cornhill on Christmas Day, and there “in despite of authority, they set up Holly and Ivy” on the pinnacles of the public water conduit. When the lord mayor despatched some officers “to pull down these gawds,” the apprentices resisted them, forcing the mayor to rush to the scene with a party of soldiers and to break up the demonstration by force.

The worst disturbances of all took place at Canterbury, where a crowd of protestors first smashed up the shops which had been opened on Christmas Day and then went on to seize control of the entire city. This riot helped to pave the way for a major insurrection in Kent in 1648 that itself formed part of the ‘Second Civil War’ – a scattered series of risings against the parliament and in favour of the king, which Fairfax and Cromwell only managed to suppress with great difficulty.
Posted by Stephanie A. Mann at 12:30 AM