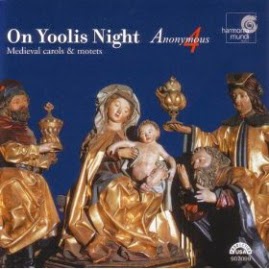 A Clerk of Oxford provides background and translation of this carol, "Behold and See":

from the manuscript of the Canterbury Franciscan James Ryman (Cambridge University Library MS. Ee 1.12), source of so many interesting fifteenth-century English carols. Its refrain is taken from the Latin Christmas hymn 'Ecce novum gaudium', but this is not a translation; only the first verse is really based on the hymn. The rest draws on traditional imagery of the incarnation - the Virgin as the fleece of Gideon and the miraculously flowering rod of Aaron - and on texts much used in Advent, such as the prophecies of Isaiah. Although simple in its language, it's a beautiful carol, weaving a wealth of images rich in poetry and meaning into its short English lines. . . .
Perhaps the carol's simple language only enhances its beauty, conveying complex theological ideas without obscuring them; it becomes transparent, you might say. The image in the last verse, of Christ entering the world through Mary like the sunbeam passing through the glass, is a very common simile in medieval literature, and one that I'm fond of . . .

The Clerk even found a performance of the Latin carol, performed by Anonymous 4 on their On Yoolis Night CD:

Email ThisBlogThis!Share to TwitterShare to FacebookShare to Pinterest
Labels: A Clerk of Oxford, Advent, Advent carols, English carols, The Incarnation