"How English history used to be told": Marshall's OUR ISLAND STORY 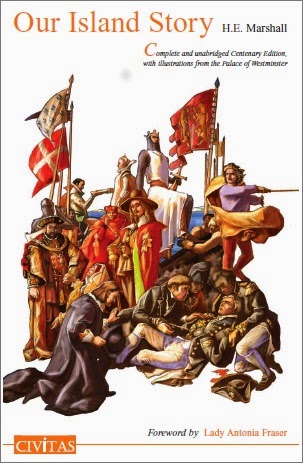 What are you supposed to do when you’re reading the gripping history book Our Island Story, by H E Marshall, to your children and you stumble into a bit that is fervently anti-Catholic? These passages crop up with monotonous regularity. For example, in the section dealing with Edward the Confessor, Marshall sneers at King Edward’s medieval piety, observing that “he thought more about building churches and buying relics or bones of holy men, long since dead, than of strengthening his castles and trying to make the lives of his people peaceful and happy”. All the priests are “rich” and all the monks “wicked”. Generally the picture is of the Middle Ages as backward and unenlightened. (But how backward can a culture have been that produced buildings of the lightness and beauty of our great cathedrals?)

That is how English history used to be told. They were the received assumptions – at least, until the current generation of historians known as the revisionists came along, most prominently Eamon Duffy, but also Jack Scarisbrick, Richard Rex and Peter Marshall.

Anti-Catholicism persists in historians’ circles, as the reaction to the revisionists demonstrates. As Duffy has written, the work of these mostly Catholic scholars is wrongly characterised in some quarters as the “grinding of papistical axes”.

Yet no one batted an eyelid when, previously, nearly all histories of the Reformation were written by Protestants. There is a list as long as your arm of them, including John Foxe in the 16th century, Gilbert Burnet in the 17th, James Froude in the 19th and, in the 20th, Sir Keith Thomas, A G Dickens, G G Coulton, A F Pollard and the Methodist Luther scholar Gordon Rupp.

Our Island Story is a very popular children's book by Henrietta Elizabeth Marshall. Civitas, "a community of researchers and supporters committed to discovering how best to strengthen democracy, uphold limited government, maintain personal freedom, achieve opportunity for all, and encourage free enterprise" has reissued the book with a foreword by Lady Antonia Fraser. Civitas provides some information about the author and her work:

Very little is known for certain about Henrietta Elizabeth Marshall. She was born in Scotland in 1867, the third daughter in a family of six children, and was warden of Queen Margaret Hall in Glasgow from 1901 to 1904. She was in Melbourne when Our Island Story was published in 1905, in Oxford from 1905 until 1908, and in Redlands, California, USA from 1913 until 1917.

All else about the author of Our Island Story remains shrouded in mystery, save for her abiding legacy to the world. This consists of a remarkable series of children’s books that she wrote, dealing for the most part with the history and literature of the British people at home and elsewhere in the world where they have settled in number.

Marshall never married and had no children. However, the subject matter of her books and the gentleness of their style suggest she may well have been a governess or private tutor to young children.

She died in London in 1941, having spent the last part of her life in straitened circumstances, but her genius as a storyteller and educator will live on for as long as boys and girls continue to be able to open the pages of her enchanting and informative books.

Through Great Britain and Ireland with Cromwell? I wonder how she deals with Drogheda and Cromwell's stated anti-Catholicism AND anti-Anglicanism.

Should a book like this, published with the express purpose of making history entertaining and easy to read, be accompanied by notes that provide greater context? If the books are not as informative as they are enchanting--or may even be deceiving when used in classrooms and schools, should they be corrected?

Brown suggests one method for a parent to use:

Without doubt, today’s revisionist historiography has acted as a necessary corrective to the dominant Protestant mode. And when reading Our Island Story, all I need to do is bowdlerise as I go along – skip or rewrite on the hoof when I come across an anti-papist belch about building churches and relics and all that murky medieval stuff. You can see how easily, if you were to give children a steady diet of this material unadulterated, an attitude of mind towards Catholicism would become ingrained. But it is very much a Victorian or Edwardian view that was carried over to the 20th century. Most importantly, it is wrong.

But again I wonder, especially when reading Civitas' explanation of why they wanted to republish the book:

But there was also a serious underlying purpose behind the decision to republish the book. Marshall knew all about the importance of the institutions of a free society, and explains thoroughly why we need to make sure the state cannot imprison people without trial, or force them to worship God in a particular way, or extract taxes without allowing people a say in the running of the country. Now that the teaching of institutional and political history is so weak in many schools, her message is of vital importance – and not only for the 7 to 11-year-olds the book is aimed at.

Does Marshall really make sure her readers know why "the state cannot imprison people without a trial" when the rights of Catholics were violated (Henry VIII having the Carthusians chained in prison, Edmund Campion and companions tortured in violation of English law during Elizabeth I's reign, etc) or why the state cannot "force them to worship God in a particular way" when it was the Catholic Mass that was outlawed (Edward VI and The Book of Common Prayer; Elizabeth I and the Act of Uniformity, recusancy laws, penal laws, etc)? I wonder.
Posted by Stephanie A. Mann at 12:30 AM