The Wreck of the Deutschland: A Kulturkampf Anniversary 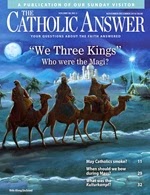 Today is St. Nicholas' Day--but it is also the anniversary of the Wreck of the Deutschland on December 6, 1875--and I wrote about that naval disaster in the context of the Kulturkampf in Germany for OSV's The Catholic Answer Magazine in this year's November/December issue:

and five Franciscan nuns drowned that night, caught in the perfect storm of the Prussian Kulturkampf instituted by Chancellor Otto von Bismarck.

They had left their convent in Salzkotten, Westphalia, embarking on a voyage to New York and thence to Wheaton, Ill., from the port at Bremerhaven, because Bismarck’s government had passed the Congregation Law of 1875, abolishing religious orders. The Catholic convert and poet Jesuit Gerard Manley Hopkins wrote a narrative poem titled “The Wreck of the Deutschland” commemorating the Franciscans’ deaths (not published until 1918), and the Franciscan Sisters of Wheaton, Ill., honor them every year on the anniversary of their deaths in the cemetery of St. Patrick’s Church in Leytonshire, where four of the five were buried.

Why were these teaching sisters on their way to the United States? Why was Bismarck’s government passing laws restricting Catholic religious orders and other aspects of Catholic life in Prussia through the program of Kulturkampf? The German word Kulturkampf is translated in English as “culture struggle.” The answers to those questions provide us greater insight into the relationship between Church and state and the issues of religious freedom, as well as the struggle Catholics faced in 19th-century Germany.

Otto von Bismarck had served in various state offices in the German Empire, culminating in the office of chancellor from 1871 to 1890 after he led the effort to unify the empire under Prussian control. After the First Vatican Council defined the doctrine concerning infallibility of the pope in matters of faith and morals, Bismarck and his anti-Catholic political allies feared the loyalty and the power of Catholics in mostly Lutheran Germany. Bismarck thought that Protestant Prussia faced a culture war and was under attack by Catholics — a Kulturkampf.

The five sisters who perished this night were:

More information about their mission here.
Posted by Stephanie A. Mann at 12:30 AM