The Prince of Wales in Spain 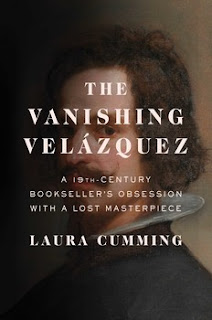 This is a good summary of the events behind the subject of Laura Cumming's book The Vanishing Velazquez:

In the spring of 1623 Charles, Prince of Wales, the young heir to the English and Scottish thrones donned a false wig and beard and slipped out of England under the assumed name of John Smith in order to journey to Madrid and secure for himself the hand of the King of Spain's daughter. His father James I and VI had been toying with the idea of a Spanish match for his son since as early as 1605, despite the profoundly divisive ramifications such a policy would have in the face of the determined 'Puritan' opposition in parliament, committed to combatting the forces of international Catholicism at every opportunity. With the Spanish ambassador, the machiavellian Count of Gondomar's encouragement to 'mount' Spain, Charles impetuously took matters into his own hands and as the negotiations stalled he departed secretly in the guise of Mr Smith to win with his romantic and foolhardy daring what his father could not achieve through diplomacy. The eventual failure and public humiliation that followed his journey to Madrid has been cited as a major influence on Charles's subsequent development and policies as king.

Another result of this journey was that Diego Velazquez painted a portrait of Prince Charles, the erstwhile suitor of the Infanta, and that portrait has been lost and found, particularly by one man in the nineteenth century, John Snare. And that's the story Laura Cummings tells, according to the publisher, Simon & Schuster:

From one of the world’s most expert art critics, the incredible true story—part art history and part mystery—of a Velazquez portrait that went missing and the obsessed nineteenth-century bookseller determined to prove he had found it.

When John Snare, a nineteenth-century provincial bookseller, traveled to a liquidation auction, he stumbled on a vivid portrait of King Charles I that defied any explanation. The Charles of the painting was young—too young to be king—and yet also too young to be painted by the Flemish painter to which the work was attributed. Snare had found something incredible—but what?

His research brought him to Diego Velazquez, whose long-lost portrait of Prince Charles has eluded art experts for generations. Velazquez (1599–1660) was the official painter of the Madrid court, during the time the Spanish Empire teetered on the edge of collapse. When Prince Charles of England—a man wealthy enough to help turn Spain’s fortunes—ventured to the court to propose a marriage with a Spanish princess, he allowed just a few hours to sit for his portrait. Snare believed only Velazquez could have met this challenge. But in making his theory public, Snare was ostracized, victim to aristocrats and critics who accused him of fraud, and forced to choose, like Velazquez himself, between art and family.

A thrilling investigation into the complex meaning of authenticity and the unshakable determination that drives both artists and collectors of their work, The Vanishing Velazquez travels from extravagant Spanish courts in the 1700s to the gritty courtrooms and auction houses of nineteenth-century London and New York. But it is above all a tale of mystery and detection, of tragic mishaps and mistaken identities, of class, politics, snobbery, crime, and almost farcical accident. It is a magnificently crafted page-turner, a testimony to how and why great works of art can affect us to the point of obsession.

I wonder if we ever see the portrait in the book? The Wall Street Journal's review of this book (written by Henrik Bering) indicates that the painting has gone underground again:

I have this book on my pile to read some day: The Spanish Match: A Novel of Catholic Spain by Brennan Pursell.
Posted by Stephanie A. Mann at 12:30 AM