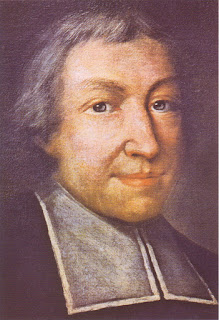 St. John Baptist de la Salle's feast day was yesterday, but I noticed this detail when reading a brief biography of him: he made an exception to his policy of educating the poor when King James II of England, in exile, made a specific request:

Although the schools had originally been founded for orphans and the children of the poor, a new departure was made at the request of King James II of England, who was then living in exile. He urged the founding of a college for the sons of his adherents, mainly Irish, who were living in France, and Father John opened such a school for fifty young men of gentle birth.

Because de la Salle emphasized teaching in the vernacular, the Irish youth learned French and French history so they could be of service to King Louis XIV.

This window is based on a drawing by 19th century artist Edouard Garnier.

Catholic King James II of England was defeated at the Battle of the Boyne, July 12, 1690 by his son-in-law, William of Orange. Supported by the French King, Louis XIV, he took up residence at St. Germain-en-Laye near Versailles, France. He asked La Salle to establish a school for the children of his Irish followers. La Salle established the school in Paris in 1700 for the Irish children.

James II, along with Archbishop Noailles of Paris, is here visiting the Irish children.

The cathedral in the background of the window is Notre Dame of Paris, the seat of Archbishop Noailles.

A rather old fashioned life of the saint offers these comments about his Irish students:

Of the subsequent careers of the lads who studied under St. John de la Salle in the exiles' boarding- school we know but little. Some of them doubtless remained at the court of Louis XIV and discharged satisfactorily the offices for which they were fitted. Some of them, we may be sure, took part in the several unsuccessful attempts to place the son and grandson of King James known respectively as the Old Pretender and the Young Pretender on the throne of England. More of them probably imitated the example of their fighting sires and in the French army struck stout blows against their English foes at Blenheim and Ramillies and, maybe, even half a century later, at Fontenoy. The wanderlust, always so potent in Irish blood, may have lured others of them across the Atlantic to Canada and the southern colonies. All that is but a matter of conjecture. But it is pleasant to reflect that through them the influence of St. John Baptist de la Salle spread into divers professions and into various parts of the world, and that the young Jacobites were better and wiser men because of their contact with the holy founder.
Posted by Stephanie A. Mann at 12:30 AM