Robert and Clara and Friedrich 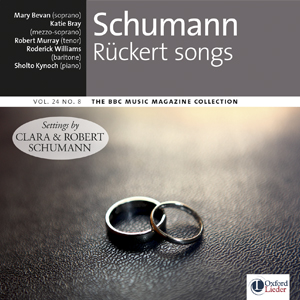 A major gap in my cultural education is German Romanticism. The BBC Music Magazine CD this month is helping me fill that gap with this recording of songs by Robert and Clara Schumann, setting poems of Friedrich Ruckert. I did recognize one of the lieder, however, because I've listened often to Mahler's Ruckert Lieder: "Liebst du um Schönheit".

If I had studied German, that might help too!

Robert Schumann (June 8, 1810 - July 29, 1856) was the arch-Romantic composer, thoroughly committed intellectually and emotionally to the idea of music being composed to register the feelings, thoughts and impressions garnered by a sensitive spirit on its journey through life. . . .

He married Clara Wieck, herself a talented pianist, but two careers in one family caused difficulties:

Throughout this period Schumann had composed almost exclusively for the piano. Now there was a tremendous outburst of lieder and the following year, much to the approval of the ambitious Clara, Schumann buckled down to compose his first symphony. Their close working relationship, and the arrival of their first child in 1841 (they produced seven in all), meant that Clara's career suffered. Although she continued her concert tours (they needed the money), she willingly suspended her other musical activities. The marriage at this time was blissfully happy. In the spring of 1841 Schumann's Spring Symphony was premiered. By the following year Clara was on tour again: as women did not travel alone at that time, Robert had to accompany her. Deeply insecure away from domestic routine, his health deteriorated and he began to resent his wife's addiction to the pleasures of concert-giving.

His professional career was still in the ascendant, and in 1843, when Mendelssohn provided the impetus for the founding of the Leipzig Conservatory, he also insisted that Schumann be given a teaching role there. Schumann, however, proved to be a diffident teacher; unable to communicate his ideas, he would often sit through an entire lesson without saying a word to his students. He resigned his post in 1844. By then his bouts of depression (he called them "melancholy") were more severe and more prolonged.

Nevertheless, he supported and encouraged his wife's efforts as a composer. They had eight children! The lieder on this disc are all about love and nature, beauty and youth, passion and and song.

Schumann died in an asylum for the insane.
Posted by Stephanie A. Mann at 1:00 AM