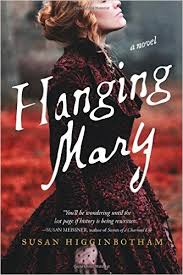 I spent several hours Saturday and Sunday reading this book, enjoying it, and then thinking about it and discussing it with my husband. Hanging Mary: A Novel is by Susan Higginbotham, the author of several novels set in the Plantagenet (especially Wars of the Roses) and Tudor eras. This novel, however, is set in Washington, DC during 1864 and 1865 as a group of conspirators plan to kidnap President Abraham Lincoln to force an end to the Civil War that favors the losing Confederacy. The conspirators keep dropping by Mary Surratt's boarding house, especially John Wilkes Booth, because Mary's son John, Jr. is involved in the plot. Mary is a widow whose husband left her with great debts but two properties, so as the story begins, she decides to lease the tavern in Surrattville and move to the house in Washington with her daughter Anna and son John (son Isaac is fighting for the Confederacy), take in boarders, and make money to pay off those debts. One of her boarders is a young woman, Nora Fitzpatrick: she and Mary are the narrators of this story, alternating chapters with their different viewpoints.

If you know American history, you know what is going to happen; nevertheless, partly because of the narrative structure, Higginbotham keeps the reader in suspense. The plot is forming before Mary's and Nora's eyes, and each of them sees strands of the web that Booth is weaving, but neither knows the whole story.

The dilemma raised is common to all plots and conspiracies, during the American Civil War or in Tudor England: when do observers on the fringes of a conspiracy become part of the conspiracy? and when do they have an obligation to report the conspiracy?

For example, yesterday I posted on the execution of Thomas Wyatt the Younger. One of keys to the failure of the Wyatt Rebellion was that Edward Courtenay warned his erstwhile fellow prisoner in the Tower of London, Bishop Stephen Gardiner, now Mary I's Chancellor, that there was a plot against the Queen. He did not have all the details, but he could at least provide the information he had.

Mary Surratt resolves that dilemma for herself, believing that Booth--without her son whom she believes is in Canada (and he is)--is going to kidnap the President. She chooses personal loyalty over national considerations. As Nora later notes, she thus removes the one person who might have offered her clemency: Abraham Lincoln. It's also important to note that the star witness for the prosecution of Mary and the other conspirators, Louis Weichmann, a classmate of John Surratt, saw many of the same things and had some concerns, but even though he was a government employee, he never reported them to the appropriate authorities.

As absorbing as this plot and these questions are, the most touching sub-plot to me was Nora Fitzpatrick's budding romance with one of the soldiers she visits at the hospital, Private Flanagan. He has "lost his right arm", although he jokes that he knows "perfectly well where he had last had it"! and has been ill while in hospital. Private Flanagan loves Nora and wants to prepare himself to wed her, that's clear. Nora may not be in love with him, but he is her favorite patient; she helps him learn how to read and write; she encourages him to hope that he might make himself worthy (be able to support her), while she also knows he will always need her help if they marry. When Nora receives bad news about Private Flanagan, Mary Surratt's motherly care of Nora does much to increase Nora's affection and loyalty to her landlady. This sub-plot, per an interview with Higginbotham included in the Kindle edition I read, is fictional, but does much to demonstrate the characteristic compassion and loyalty of the two narrators.

Another aspect of the novel piqued my interest: the Catholicism of the Surratts, Fitzpatricks, the Holohans, and of Louis Weichmann, who is discerning a vocation to the priesthood. Although Protestant Christians in 19th century America did not practice orthodox Lutheranism or Calvinism (neither Martin nor John would recognize their theology, per Mark A. Noll), they did practice orthodox anti-Catholicism. That aspect of their religion never seems to come up in Hanging Mary, but Catholic priests, services, and prayers are often mentioned. While it's part of the record, I was surprised to see mention of Good Friday evening services; I thought that from the Middle Ages and until 1955, when Pope Pius XII reformed the Holy Week liturgy, all the services were held in the morning? Perhaps the service mentioned was Stations of the Cross? One other little liturgical question: why did Mary Surratt touch the "wafer" (I think she, as a Catholic, would have referred to what she receive in Holy Communion as the "Host") while receiving the Eucharist in prison? From the Middle Ages until the late twentieth century, nearly all Catholics received Holy Communion on the tongue, not in the hand (please see chapter 47). But those are little things--but little things a Catholic like me would notice!

I highly recommend this novel: it provides true literary enjoyment, and tension; is thought-provoking, moving, and in every way, excellent! The author encourages purchase from an independent bookseller but Hanging Mary is readily available in several formats from Amazon.com and Barnes & Noble too.

Note: I purchased my copy of this book. I look forward to participating in a blog tour for Susan Higginbotham's next book, Margaret Pole: The Countess in the Tower, coming out this August from Amberley Press.
Posted by Stephanie A. Mann at 12:30 AM