The Nuns of St. John in England 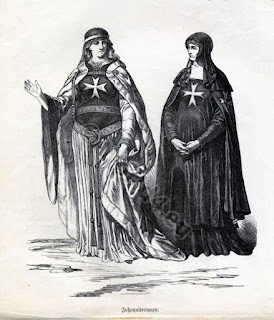 On the blog of the Museum of the Order of St. John, Nancy Mavroudi writes about the nuns of the Order:

If we were to generalise, we would probably say that Hospitaller women were primarily wealthy, noble women, from aristocratic or powerful families who, in many cases were even forced to join the Order by their families for spiritual benefits – the Order’s blessing for the family. However, although popular, such generalisations are not always accurate. To start with, there is evidence that many women joined voluntarily, simply because they so wanted. Joining a community of Sisters could bring about a change in their lives in which they themselves might have found comfort – especially given that, as discussed in further detail below, the Order could potentially be a more privileged and safe space to be.

Also, not all women had to be wealthy to become Sisters, although this would have been an advantage. There is often evidence that women from all walks of life would be admitted to the Houses, regardless of their financial situation but rather because of their skills that might have matched the practical needs of specific Houses. Those skills ranged from baking and cooking, to farming and to numeracy/literacy, and administration skills. For example, according to the religious tradition around St Ubaldesca (whose portrait can be found in the Order Gallery in our Museum) she came from an underprivileged background. Her father was a baker and their family was struggling to make ends meet; still she was able to join the House in Pisa and was later renounced (sic) Saint.

She describes their duties and contribution to the work of the Order:

Being in charge of a House came with all the responsibilities of running a small community, as well as a religious institution with charitable operations. They were Sisters, as well as carers and nurses (when a Hospital was attached to the House), but they were also administrators, managers, and governors. Perhaps more evident in the independent female convents with their relative autonomy and self-regulation, these female communities had to manage their affairs efficiently in order to be able to survive – from bookkeeping and general administration duties, managing estates, purchases and stock checks, to building maintenance and repairs – especially at times of limited funding when external assistant was not an option. There is evidence that in mixed Houses the Sisters would often come together as collective agents in order to achieve fairer conditions for them, and demand more reasonable funding for the improvement of their lives in the House by organising against the Brothers who felt gave them an unfair share to cover their everyday needs. For example, in Mynchin Buckland (England) the Sisters ‘revolted’ against the Brothers because of unfair treatment in the distribution of the assets between the men and the women and it was serious enough to result in the need of the Prior of England’s intervention to resolve the issue.

Hospitaller women did occupy in many ways positions of leadership and the existence of a Prioress in medieval times was not uncommon. We know from the records saved that in Mynchin Buckland, for example, the Prioress was voted for by her fellow-Sisters, and that in Siena (Spain) the Prioress was ruling over both the Sisters and the Brothers. They had created what was, in many ways, hubs of community support for each other, where levels of independence were often different to what they might have had experienced in their life outside the House. Joining as a Sister opened possibilities for them in areas that were often inconceivable -the example of referring other female family members to the House in order to bypass gender restrictions in the passing of property between them was once such strategic move among others.

The house of Mynchin Buckland, according to British History Online, was founded in 1166:

Soon after the sisters of this order that were scattered in several commanderies in England were gathered together in one house at Buckland, so there was attached to the preceptory the only priory in England of Sisters of the Order of St. John. In later times, because they adopted the rule of the Austin Canonesses for their daily life, these sisters have sometimes been referred to as sisters of that order. The sisterhood began with eight members. Milsant was transferred from the commandery at Standon in Hertfordshire; Johanna also from Standon; Basilia from Carbrooke in Norfolk; Amabilia and Amica de Malketon from Shingay in Cambridgeshire; Christina de Hogshaw from Hogshaw in Bucks; Petronilla from Gosford, and Agnes from Clanfield in Oxfordshire. (fn. 9) These were now gathered at Buckland. The house however was not independent. It was a preceptory with preceptors in charge, and a priory of sisters dependent on it, but governed by a prioress.

Nobles and royalty granted pensions to the nuns in the twelfth through fourteenth centuries. It was, of course, dissolved under Henry VIII:

On 10 February 1539 (fn. 35) the sisters appeared in their chapter-house and formally surrendered their house and its endowments to the king at the hands of John Tregonwell and William Petre. The Popham family had obtained a large amount of their property on lease, and the action of the prioress accounts probably for the favourable arrangements which were made for her and the sisters. The prioress received a pension of £50 a year, and pensions were granted to thirteen sisters as well as to Sir William Mawdesley, confessor to the house. (fn. 36) The prioress also received a gift of £25 (fn. 37) by way of gratuity.

In Cardinal Pole's pension list, 1556, there are payments entered to seven sisters still alive and drawing their pensions.

Note that the Museum of the Order of St. John, while reflecting often on the pre-Reformation Hospitaller Order is a modern foundation, as its website states:

The modern Order of St John in England was granted a Royal Charter by Queen Victoria in 1888. Humanitarian in its aims and purpose, the modern Order recognised the need for public First Aid and ambulance transport services, as no such system existed in newly industrialised England. In addition, the Order established an eye hospital in Jerusalem, following the principles of the Order’s first hospital, treating all those in need, regardless of faith or wealth. The Order’s full title is The Most Venerable Order of the Hospital of St John of Jerusalem. Its principal charitable foundations today are the St John Eye Hospital in Jerusalem, and St John Ambulance.
Posted by Stephanie A. Mann at 12:30 AM

Email ThisBlogThis!Share to TwitterShare to FacebookShare to Pinterest
Labels: Knights Hospitallers, Museum of the Order of St. John, Mynchin Buckland, nuns, The Dissolution of the Monasteries