Restoring a Reputation: NOT Mary I's 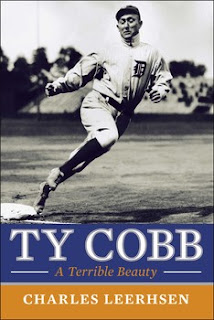 Major League Baseball is far from the topic of this blog, but the theme of historians revising received history and setting the record straight is. In justice to the dead, I want to see our views corrected if they are wrong and personal reputations restored if they are unjust: Ty Cobb's no less than Mary I's.

The latest biographer of Ty Cobb found out that there was a reputation to restore. We don't really know the truth about Ty Cobb at all. Charles Leerhsen writes for Imprimis at Hillsdale College, noting how everyone accepted the "truth" that Cobb was a dirty player and terrible racist:

Ty Cobb was one of the greatest baseball players of all time and king of the so-called Deadball Era*. He played in the major leagues—mostly for the Detroit Tigers but a bit for the Philadelphia Athletics—from 1905 to 1928, and was the first player ever voted into the Hall of Fame. His lifetime batting average of .366 is amazing, and has never been equaled. But for all that, most Americans think of him first as an awful person—a racist and a low-down cheat who thought nothing of injuring his fellow players just to gain another base or score a run. Indeed, many think of him as a murderer. Ron Shelton, the director of the 1995 movie Cobb, starring Tommy Lee Jones in the title role, told me it was “well known” that Cobb had killed “as many as” three people.

It is easy to understand why this is the prevailing view. People have been told that Cobb was a bad man over and over, all of their lives. The repetition felt like evidence. It started soon after Cobb’s death in 1961, with the publication of an article by a man named Al Stump, one of several articles and books he would write about Cobb. Among other things, Stump claimed that when children wrote to Cobb asking for an autographed picture, he steamed the stamps off the return envelopes and never wrote back. In another book—this one about Cobb’s contemporary Tris Speaker—baseball historian Timothy Gay wrote (implausibly, if you think about it) that Cobb would pistol-whip any black person he saw on the sidewalk. And then there were the stories about how Cobb sharpened his spikes: before every game, numerous sources claim, he would hone his cleats with a file. In the 1989 film Field of Dreams, Shoeless Joe Jackson says that Cobb wasn’t invited to the ghostly cornfield reunion of old-time ballplayers because “No one liked that son of a bitch.” The line always gets a knowing laugh.

When I pitched my idea for a book on Cobb to Simon and Schuster, I was squarely in line with this way of thinking. I figured my task would be relatively easy. I would go back to the original source material—the newspaper accounts, documents, and letters that previous biographers had never really looked at. I would find fresh examples of Cobb being monstrous, blend them with the stories that Al Stump and others wrote, and come up with the first major Cobb book in more than 20 years. But when I started in on the nuts-and-bolts research with original sources—the kind of shoe-leather reporting I had learned working at Newsweek in its heyday—it didn’t even take me ten minutes to find something that brought me up short.

Leerhsen then describes how much that we thought was true, and much that has been repeated and repeated--including by Ken Burns in his PBS series on Baseball--is wrong. Cobb was certainly not a racist and those who played with him did not consider him a dirty player. *Leerhsen refers to "the so-called Deadball Era" before Babe Ruth and other sluggers came along, hitting home runs and driving up the score. Major League Baseball B.R. (before Ruth) was probably much more exciting to watch because it was all about base running, stealing bases--Cobb, Leerhsen reminds us "still holds the record for stealing home, doing so 54 times. He once stole second, third, and home on three consecutive pitches, and another time turned a tap back to the pitcher into an inside-the-park home run." Now, that's thrilling. But MLB changed some rules and the equipment (the ball, especially), and baseball play changed.

Cobb was no angel (who but an angel is?) but it's not right that his reputation should be as abused as it is. If documentary maker Ken Burns reads this book, he should revise his presentation of Cobb in his Baseball series, since it's not true. Leerhsen notes that Burns casts Cobb as the "anti-Jackie Robinson" when in fact Cobb was all in favor of integration in Major League Baseball. Even though he has a nice narrative going, he should eschew the legend and broadcast the fact. As Leerhsen points out, when people start saying things like "it's well-known fact" and then can't cite any source to prove that "well-known fact", they should admit that they might not know what they are talking about!
Posted by Stephanie A. Mann at 12:30 AM