The Catholic Enlightenment: Yes, There Was One 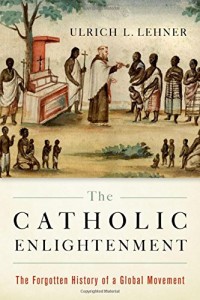 From The Imaginative Conservative, Bradley Birzer reviews another book I'd love to read someday:


The Catholic Enlightenment is a great book. Indeed, no recent academic work on Catholicism has raised my hopes this high for the current level of scholarship since first having encountered the writings of Christopher Dawson a decade and a half ago. And, while I am no expert (nor do I even know enough to pretend to be) on the history of European Catholicism between the Counter Reformation and the French Revolution, Dr. Lehner’s latest book, The Catholic Enlightenment, not only raises some of the most important questions about the faith and about the West, but it also fills in some critical gaps in our understanding of each.

The sum of Dr. Lehner’s argument is this: contrary to popular and secular mythologies, the Church possessed a number of critical personalities and intellectual leaders who actively engaged the ideas of democracy, individualism, liberalism (properly understood), and what would be called, ultimately, modernity. All of this happened between the Council of Trent and the end of the French Revolution. Surprisingly, at least to me, Catholic scholars and theologians considered, studied, and digested the importance of the thought of John Locke, Immanuel Kant, and even Jean-Jacques Rousseau. Indeed, they not only took the ideas of non-Catholic scholars seriously, they actually attempted to meld secular thought with Catholic theology. Dr. Lehner, much to his credit, never over-makes his case. He recognizes that there were many, many “Enlightenments” during the few centuries leading up to the French Revolution, just as our own John Willson stresses the need to acknowledge many “Foundings” in the American Founding period. Additionally, Dr. Lehner never claims that these Catholic Enlighteners—as he calls them—dominated scholarship or the thinking of the Church as a whole. Rather, he notes, time and time again throughout his book, they attracted attention, bonded with one another, and changed, shaped, and delimited the philosophical and theological discussion within the Church.

Read the rest there. Dr. Lehner has a rigorous publication schedule ahead of him, per an interview Dr. Birzer conducted:

Birzer: Second, what’s the next book?

Lehner: My first follow up comes out in July with Fortress Press: On the Road to Vatican II: German Catholic Enlighteners and Reform of the Church, where I explore in more detail the German scene.

Birzer: Third, and after that?

The next book is an edited collection of essays on Women, Catholicism and Enlightenment—because nobody has paid much attention to the female Enlighteners who were Catholic (out next year with Routledge). Simultaneously, I am writing two monographs, one a systematic study on asceticism and moral formation, and a book on Catholicism during the Nazi time.

Oxford University Press posts this description of The Catholic Enlightenment:

"Whoever needs an act of faith to elucidate an event that can be explained by reason is a fool, and unworthy of reasonable thought." This line, spoken by the notorious 18th-century libertine Giacomo Casanova, illustrates a deeply entrenched perception of religion, as prevalent today as it was hundreds of years ago. It is the sentiment behind the narrative that Catholic beliefs were incompatible with the Enlightenment ideals. Catholics, many claim, are superstitious and traditional, opposed to democracy and gender equality, and hostile to science. It may come as a surprise, then, to learn that Casanova himself was a Catholic. In The Catholic Enlightenment, Ulrich L. Lehner points to such figures as representatives of a long-overlooked thread of a reform-minded Catholicism, which engaged Enlightenment ideals with as much fervor and intellectual gravity as anyone. Their story opens new pathways for understanding how faith and modernity can interact in our own time.

Lehner begins two hundred years before the Enlightenment, when the Protestant Reformation destroyed the hegemony Catholicism had enjoyed for centuries. During this time the Catholic Church instituted several reforms, such as better education for pastors, more liberal ideas about the roles of women, and an emphasis on human freedom as a critical feature of theology. These actions formed the foundation of the Enlightenment's belief in individual freedom. While giants like Spinoza, Locke, and Voltaire became some of the most influential voices of the time, Catholic Enlighteners were right alongside them. They denounced fanaticism, superstition, and prejudice as irreconcilable with the Enlightenment agenda.

In 1789, the French Revolution dealt a devastating blow to their cause, disillusioning many Catholics against the idea of modernization. Popes accumulated ever more power and the Catholic Enlightenment was snuffed out. It was not until the Second Vatican Council in 1962 that questions of Catholicism's compatibility with modernity would be broached again.

Ulrich L. Lehner tells, for the first time, the forgotten story of these reform-minded Catholics. As Pope Francis pushes the boundaries of Catholicism even further, and Catholics once again grapple with these questions, this book will prove to be required reading.

Doctor Lehner has also posted on the OUP blog, discussing the quality of Catholic mercy through the centuries.
Posted by Stephanie A. Mann at 12:30 AM