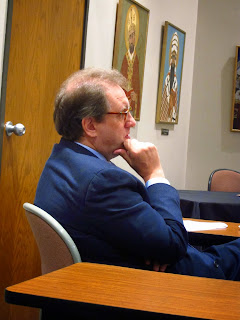 Although Dale Ahlquist won't be at Eighth Day Books tonight at 6:30 p.m. (and he surely would wish he could be here!) our core group is hoping to see some new Chesterton fans at our meeting tonight. We made some connections at the Catholic Culture Conference in April.

We are going to discuss two more chapters in The Well and the Shallows: "The Return to Religion" and "The Reaction of the Intellectuals". In the first essay, Chesterton discusses the destruction of Marriage in his own time:

To take one example out of many; the whole question of Marriage has been turned into a question of Mood. The enemies of marriage did not have the patience to remain in their relatively strong position; that marriage could not be proved to be sacramental, and that some exceptions must be treated as exceptions, so long as it was merely social. They could not be content to say that it is not a sacrament but a contract, and that exceptional legal action might break a contract. They brought objections against it that would be quite as facile and quite as futile, if brought against any other contract. They said that a man is never in the same mood for ten minutes together; that he must not be asked to admire in a red daybreak what he admired in a yellow sunset; that no man can say he will even be the same man by the next month or the next minute; that new and nameless tortures may afflict him if his wife wears a different hat; or that he may plunge her into hell by putting on a pair of socks that does not harmonise with somebody else's carpet. It is quite obvious that this sort of sensitive insanity applies as much to any other human relation as to this relation. A man cannot choose a profession; because, long before he has qualified as an architect, he may have mystically changed into an aviator, or been convulsed in rapid succession by the emotions of a ticket-collector, a trombone-player and a professional harpooner of whales. A man dare not buy a house for fear a fatal stranger with the wrong sort of socks should come into it; or for fear his own mind should be utterly changed in the matter of carpets or cornices. A man may suddenly decline to do any business with his own business partner; because he also, like the cruel husband, wears the wrong necktie. And I saw a serious printed appeal for sympathy for a wife, who deserted her family because her psychology was incompatible with an orange necktie. This is only one application, as I say; but it exactly illustrates how the sceptical principle is now applied; and how scepticism has recently changed from apparent sense to quite self-evident nonsense. The heresies not only decay but destroy themselves; in any case they perish without a blow. 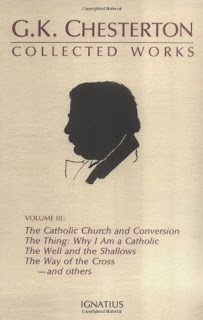 In the second essay, Chesterton discusses the Sitwells, Edith, Sacheverell, and Osbert:

I will take one particular case which is rather a parable. Some time ago all the fine old English critics, Constant Readers and Conservative people generally, were in a ferment of fury and mockery against the impudent innovations of "the Sitwells"; that is, the three poets of that family. They were a proof that being modern means going mad. They were the very latest and loudest anarchists, destroying both rhyme and reason. I will not discuss their merits here. When Miss Sitwell accused the Dawn of "creaking," there were discussions as to her meaning. Her foes said it was random nonsense, like describing the sun as sneezing or the grass as blowing its nose. Her friends said it was a bold and novel way of suggesting something harsh and reluctant about the cold morning light. But everybody agreed that it was the very latest and newest experiment, whether in liberty or in lunacy. The Sitwells were accused of beating the big drum, or blowing their own trumpet; but it was agreed that their drums and trumpets were the newest musical instruments of the queerest shape; and that they used the newest methods of shrieking for what they wanted. But what did they want?

Now, what the Sitwells want is Victorianism. What they do definitely desire, demand and incessantly describe, is a reaction to Victorian habits; to Victorian manners; and even to Victorian morals. As certainly as Shelley wanted a lot of wind and light and the rise of the pure pagan republic, as surely as Walt Whitman wanted democratic breadth and a sort of bodily brotherhood among men out-of-doors, so certainly what the Sitwells want is Victorian flower-beds and hot-houses, Victorian coloured patchwork and curios under glass; and, in no small degree, Victorian etiquette, distance and dignity. This may be a fad but it is a fact; and it is a fact that vividly illustrates the real revolt against recent moral, or immoral, tendencies. The Victorian revolt is not a revolt of Victorians. It is a revolt of Post-Victorians or rather of Post-Post-Victorians. They are going back to something remote, as much as the Pre-Raphaelites in going back to the Middle Ages. In both cases the reason is the same; because the modern ages have become too unbearably stupid for intelligent people. But the more modern case is the more acute case of this revolt against modernity among the moderns. To understand it, we must take a more general view of the singular situation in the world to-day.

I first learned about the Sitwells when studying seventeenth century English history because their ancestor, William Sacheverell was one of the great Whig politicians opposing Charles II's more Catholic efforts and alliances and the succession of James, the Duke of York, because he was Catholic. Sacheverell was also one of most active prosecutors of supposed conspirators of the supposed Popish Plot including Blessed Edward Coleman (Mary of Modena's Catholic Secretary), according to Sacheverell's Parliamentary biography:

Sacheverell was appointed to most of the important committees in the last session of the Cavalier Parliament, including the inquiry into the Popish plot, acting as chairman for the examinations of Coleman and Samuel Atkins. He helped to draw up reasons for a conference on the plot on 31 Oct. and the articles of impeachment of Lord Arundell of Wardour, while taking part during November in drafting eight addresses. On the address for the withdrawal of the Duke of York from the King’s presence, he said:

I have read a little in the law, but I would have the gentlemen of the long robe tell me whether any degree or quality whatsoever of any subject can patronize any correspondence with the King’s enemies? Or whether the King and Parliament may not dispose of the succession of the Crown, and whether it be not praemunire to say the contrary?

On 6 Nov. he moved for the printing of Coleman’s letters, and three days later he alone had the courage explicitly to demand exclusion, and expose the hollowness of the King’s promises of limitations on a Popish successor. Sacheverell’s biggest coup was due to William Williams, who enabled him to produce a list of commissions to Roman Catholic officers countersigned by Williamson. The House ordered the secretary to the Tower, but he was released by the King next day, much to his indignation. He protested at the Lords’ amendment exempting the Duke of York from the bill to hinder Papists from sitting in Parliament:

With Thomas Bennett he acted as teller against the amendment On 21 Nov. He was one of the five Members given special responsibility for the impeachment of the other four Popish lords on 5 Dec. Two days later at his suggestion the Elizabethan Act of Association was read to the House, and he moved that it should be felony for foreigners, as well as Papists, to appear in arms. He took an active part in conferences with the Lords about disbandment. On 14 Dec. he was appointed to the committee of secrecy, and, after speaking in favour of Danby’s impeachment, he was among the Members ordered to prepare it. Altogether he was named to 207 committees in this Parliament, most of them for public bills or affairs of state, acted as teller in ten divisions, and made over 170 speeches.7
Posted by Stephanie A. Mann at 12:30 AM