480 Years Ago: St. Thomas More Writes to His Daughter Meg 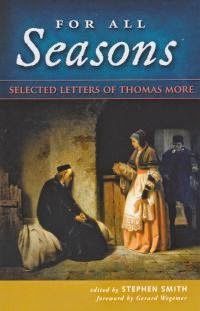 While I am teaching about The Real St. Thomas More this morning at the Spiritual Life Center here in Wichita, I'll be sure to highlight the appropriateness of holding such a class on this date.

On April 30, 1535, Thomas More was called out of his cell in the Tower of London to be presented with the opportunity to swear the new Oath of Supremacy under the threat of the Treason Act. He learned that the Carthusian Priors and Richard Reynolds had been found guilty and were condemned to death. He would see them leave the Tower for Tyburn on May 8, 1535. These events took place 480 years ago. He wrote to his daughter, Margaret Roper, on May 2 to describe the discussion he and Thomas Cromwell had regarding his refusal to take this new Oath (when he had refused to take the former Oath of Succession in 1534, more than a year before).

More argued that he was doing nothing to oppose Henry VIII and that Henry VIII knew it:

I answered that in good faith I had well trusted that the King's Highness would never have commanded any such question to be demanded of me, considering that I ever from the beginning well and truly from time to time declared my mind unto his Highness, and since that time I had, I said, unto your Mastership Master Secretary also, both by mouth and by writing. And now I have in good faith discharge my mind of all such matters, and neither will dispute King's titles nor Pope’s, but the King’s true faithful subject I am and will be, and daily I pray for him and for all his, and for you all that are of his honorable Council, and for all the realm, and otherwise than thus I never intend to meddle.

More writes to Margaret how they tried a different tactic with him to persuade him to swear and how he replied:

I am, said I, the King’s true faithful subject and daily beadsman and pray for his Highness and all his and all the realm. I do nobody harm, I say none harm, I think none harm, but wish everybody good. And if this be not enough to keep a man alive, in good faith, I long not to live. And I am dying already, and have since I came here been divers times in the case that I thought to die within one hour, and I thank our Lord I was never sorry for it, but rather sorry when I saw the pang past. And therefore my poor body is at the King’s pleasure; would God my death might do him good.

More then went back to his cell. When he wrote to Margaret on May 2, he was preparing his family for what was was coming.

Whereupon I was delivered again to Master Lieutenant, which was then called in, and so was I by Master Lieutenant brought again into my chamber, and here am I yet in such case as I was, neither better nor worse. That which shall follow lies in the hand of God, whom I beseech to put in King’s Grace’s mind that thing that may be to his high pleasure, and in mine, to mind only the weal of my soul, with little regard of my body.

And you with all yours, and my wife and all my children and all our friends both bodily and ghostly heartily well to fare. And I pray you and all them, pray for me, and take no thought whatsoever shall happen me. For I verily trust in the goodness of God, seem it never so evil to this world, it shall indeed in another world be for the best.

More remained in his cell until June 3, 1535, when he was questioned again--and then went to trial on July 1 and to Tower Hill for execution on July 6. My publisher, Scepter, has this book  (see the cover above) of selected letters of St. Thomas More in their catalog--fewer than 200 copies are in stock--that provides brief introductions to each of the letters in the book. It's an excellent resource.
Posted by Stephanie A. Mann at 12:30 AM