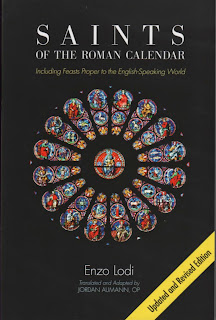 Today is the memorial of St. Augustine of Canterbury. CNA has this profile, emphasizing his role as Pope St. Gregory the Great's chosen leader of the re-evangelization of England:

Around 595, five years into his 14-year pontificate, Pope Gregory set to work on a plan for the conversion of the English people. The Catholic faith had already been preached and accepted among England's original Celtic inhabitants, in earlier times; but from the mid-fifth century onward, the country was dominated by Anglo-Saxon invaders who did not accept Christianity, and were not converted by the small number of isolated Celtic Christian holdouts. Thus, England largely had to be evangelized anew.

For this task the Pope chose a group of around forty monks – including Augustine, who was to represent the delegation and communicate on its behalf. Though he was not explicitly chosen as its leader at that time, that was the role he ended up taking on with Gregory’s support. The group left for England in June 596, but some of the missionaries lost their nerve after hearing fearsome reports about the Anglo-Saxons. Augustine ended up returning to Rome, where he got further advice and support from the Pope.

Persuaded to continue on their way, the missionary-monks reached their port of departure and set sail for England in spring of 597. After arriving they gained an audience with King Ethelbert of Kent, a pagan ruler whose Frankish wife Queen Bertha was a Christian. Speaking with the king through an interpreter, Augustine gave a powerful and straightforward presentation of the Gospel message, speaking of Christ’s redemption of the world and his offer of eternal life.

Since St. Augustine of Canterbury's abbey was suppressed by Henry VIII, his Catholic shrine in England is St. Augustine's in Ramsgate, designed and built by the great A.W. N. Pugin in the 19th century and named the saint's shrine in 2012. The church is celebrating a St. Augustine Week right now, with various events.

God, Our Father,
by the preaching of Saint Augustine of Canterbury,
you led the people of England to the Gospel.
May the fruits of his work continue in your Church.
Grant that through his intercession,
the hearts of those who err may return to the unity of your truth
and that we may be of one mind in doing your will.
Through your Son, Our Lord Jesus Christ,
in the unity of the Holy Spirit. Amen.
Posted by Stephanie A. Mann at 12:00 AM