A Book about a Queen's Books 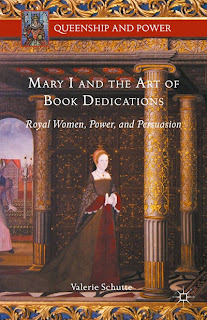 From Palgrave Macmillan, a book to be published this August in the Queenship and Power series:

Printed book and manuscript dedications were at the juncture between the actual interests and reading abilities of Tudor royal ladies and the beliefs and hopes of those who wrote and printed them on what was suitable for royalty and how royal ladies might be persuaded in certain directions. Queen Mary I received eighteen manuscript dedications and thirty-three printed book dedications, the majority of them were religious in nature, specifically addressing a return to Catholicism. In this revisionist approach to book history and Marian studies Valerie Schutte argues that dedications, and the negotiations that accompanied them, reveal both contemporary perceptions of how statecraft, religion, and gender were and the political maneuvering attempting to influence how they ought to be. Schutte offers the first comprehensive catalogue of all book and manuscript dedications to Mary and all books that were known to have been in Mary's possession.

When you review the books published in the Queenship and Power series thus far, most of them are about Elizabeth I, so it's good that the editors of the series are addressing that imbalance in a way. There's no surprise that Mary would receive books dedicated to her in support of bringing Catholicism back to England as she was engaged in eliminating all the legislation passed during Edward VI's reign as soon as she came to the throne. There's also no surprise that the Princess and later Queen Mary would have manuscripts and books dedicated and presented to her: she received a careful Christian humanist education at the direction of her mother Katherine of Aragon. To quote any earlier blogpost:


Juan Luis Vives of Spain became Mary's tutor and wrote a handbook on the education of Christian females which he dedicated to Katherine of Aragon: De Institutione Feminae Christianae. He detailed the course of Mary's study in De ratione studii puerilis. While he is not a feminist nor overemphasizes female virtue, he is certainly not a misogynist although he is opposed to fancy clothing and makeup. Vives resided at Corpus Christi College in Oxford where he lectured on philosophy as a Doctor of Law. Henry and Katherine attended some his lectures. Because he supported Katherine against Henry in the King's Great Matter, he fled to the Continent, residing in Bruges.

The Table of Contents:

Could be a fascinating book to read, but it's far out of my price range. I just completed an article about Reginald Cardinal Pole commissioned by a publication--the most recent biography of Pole, from Ashgate Publishing, costs $125.00. Some books are just written and published for an exclusively academic audience.
Posted by Stephanie A. Mann at 12:30 AM