Stile Antico in Oxford at St. John the Evangelist 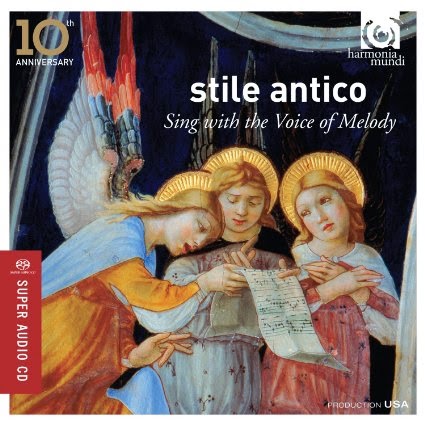 I've noted this new release on Amazon.com but can't find any information yet about whether it's a new release or a compilation of previously released material yet. Neither the Harmonia Mundi website nor the Stile Antico website provide any hints. It isn't out until June.

The Stile Antico website did lead me to the Oxford Early Music Festival website since Stile Antico will be performing "Music for Compline" at the Church of St. John the Evangelist on May 17:

Internationally renowned vocal ensemble, Stile Antico, celebrate their tenth anniversary with this performance of works written for the monastic Office of Compline.

As the darkness folded around the pillars of their churches, mediaeval worshippers gathered for the service of Compline, commending themselves to God’s protection through the long watches of the night. It was an occasion that inspired the great English composers to some of their most intimate and uplifting music. Tonight’s programme features music by the great composers of the Tudor era, including Byrd, Tallis and Taverner.

Stile Antico is firmly established as one of the world’s most accomplished and innovative vocal ensembles. Working without a conductor, its twelve members have thrilled audiences throughout Europe and North America with their fresh, vibrant and moving performances of Renaissance polyphony. Its bestselling recordings on the Harmonia Mundi label have earned accolades including the Gramophone Award for Early Music, the Diapason d’or de l’année, the Edison Klassiek Award and the Preis der deutschen Schallplattenkritik, and have twice received Grammy® nominations.

The Church of St. John the Evangelist was once the home of an Anglican religious order for men:

From 1866 to 1980, this complex of buildings was the mother house of the Society of St John the Evangelist (the ‘Cowley Fathers’). Established in 1866 by Richard Meux Benson whilst vicar of St James’ church, Cowley, it was the first religious community for men founded in the Church of England since the Reformation. With two other ‘mission priests’ he planted his community in the fast developing suburb between Cowley village and Oxford town. The community eventually spread to the United States of America, India and Japan. The English province of the Society still maintains a presence at St Edward’s House, Westminster, close to the Abbey and Westminster School.

In 1859, a new parish was created out of St James Cowley and St Clement’s: Cowley St John. Fr Benson established the ‘iron church’ on Marston Street. He was joined in 1865 by Fr Grafton and Fr O’Neill.

In 1866 the Society of St John the Evangelist was constituted and placed under the care of the Bishop of Oxford.

From a quick glance at it's North American website, the order is definitely High Church and Anglo-Catholic: the sacramental and liturgical life is emphasized. In the U.K., the order has become a charity and there is no community:

In 2012 the last monastery of SSJE in England, St Edward’s House, Westminster, closed and the three remaining monks moved, continuing their Religious life as Solitaries. The noviciate is closed in England.

More on Richard Meux Benson (any relation to the famous Benson family?) here.
Posted by Stephanie A. Mann at 12:30 AM