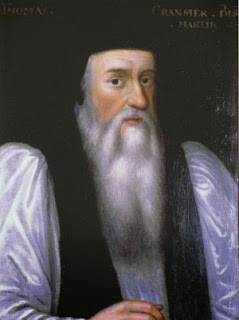 Diarmaid MacCulloch speculated on what might have happened if Thomas Cranmer hadn't been executed during the reign of Mary I (because Mary I never reigned) in this 1996 article from History Today magazine:

What would the Church of England have looked like if instead of Queen Mary's triumph in 1553, Queen Jane's quite reasonable hereditary claim to the throne had succeeded in establishing her regime? The Lady Mary would have to have been effectively neutralised, and one fears that neutralising her for good would have involved the block, in a return to Henrician savagery. The Lady Elizabeth could have been married off to Lord Robert Dudley, a good catch for a royal bastard, and a good chance for them both of a happy love-match.

Archbishop Cranmer, living to his allotted three-score years and ten or beyond, could produce a third version of his two earlier Prayer Books of 1549 and 1552, in the light of friendly criticism from continental reformers whom he respected, like Peter Martyr, Johann Heinrich Bullinger and Calvin. He would be succeeded as archbishop by Nicholas Ridley or Robert Holgate, with energetic younger. reformers like Edmund Grindal ready to make their mark and pick up good ideas from the best reformed churches of Europe. The Scots immigrant John Knox, mellowed by an increasingly successful career in the Church of England, would be appointed Bishop of Newcastle, benevolently taking no notice of the advanced congregations in his diocese who received communion sitting; this was a practice in any case increasingly common throughout Jane's Church, despite Cranmer's grumbles. Cranmer's cherished reform of the old popish canon law would be achieved; the primer and catechism published at the very end of Edward's reign in 1553 would become the standards; the Forty-two Articles would have been unmodified by Elizabethan hesitations about relegating the significance of the sacrament of Holy Communion to that merely of a symbolic repetition.

Out in the parishes, metrical psalms in the style of Geneva would quickly have spread: these were the best secret weapon of the English Reformation, making its public worship and private devotional practice genuinely popular throughout increasing areas of the kingdom. This congregational music would also take over in the cathedrals, now devoid of choirs or polyphony, and with their organs (where they survived) used mainly for entertainment in the Dutch fashion. The conservative nobility would continue the sullen public compliance with religious change which they had shown under Edward VI, their private celebration of ceremonial worship tolerated as eccentricity, like the Lady Elizabeth's patronage of choral music in her own chapel.

The traditionalist higher clergy would gradually die off in senior church offices and the universities, with no possibility of like-minded replacement: since the universities produced no major haemorrhage of exiles in the 1560s, the Jesuits and other religious orders would find it difficult to recruit potential clergy to train for their attempt to treat Jane's England as a mission field. England would have become the most powerful political player in the Reformed camp, with Cranmer a cordial if geographically distant partner with John Calvin. It is powerfully symbolic that it was Cranmer's son-in-law Thomas Norton who translated Calvin's Institutes into English, and Cranmer's veteran printer Reyner Wolfe who published it. With a Cranmer-Calvin axis, the profile of Reformed religion across the whole Continent would have been changed, and with the help and encouragement of Bishop Knox, the Reformation in Scotland might have followed a close path to the Reformed Church of England.

Then MacCulloch acknowledges what happened instead when Elizabeth I came to the throne after Mary I's death and created a compromise Church of England that in some ways thwarted Cranmer's reforms, especially in its "long march away from Cranmer's eucharistic theology". MacCulloch traces the ambiguous legacy of Thomas Cranmer through the Stuarts to the Tractarians concluding:

In an ecumenical age, which honours honest doubt and hesitancy as a lesser evil than clear-eyed ideological certainty, Cranmer may win admirers and sympathisers and take his due place in Anglican history. He would not have known what Anglicanism meant, and would probably not have approved if the meaning had been explained to him, but without his contribution, the unending dialogue of Protestantism and Catholicism which forms Anglican identity would not have been possible. Beyond the concerns of Christianity, for all those who criticise his politics, or find his theology alien, Cranmer's language remains as the most enduring monument to Henry Vlll's and Edward VI's most faithful servant. Twentieth-century scholarship has reminded us just how fundamental is the structure of language to the way in which we construct our lives and our culture. Cranmer's language lies at the heart of our own English-speaking culture, which has now become so central to the destiny of the world.

Email ThisBlogThis!Share to TwitterShare to FacebookShare to Pinterest
Labels: Choral Evensong, Elizabeth I, The Book of Common Prayer, the Church of England, the Via Media, Thomas Cranmer