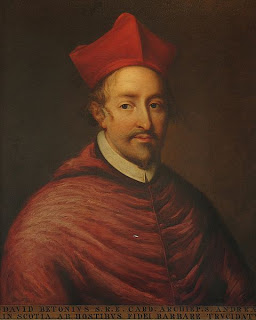 On May 29, 1546 the Cardinal Archbishop of St. Andrews, David Beaton, the last Catholic Cardinal named before the Scottish Reformation erupted, was murdered at St. Andrew's Castle. According to the Catholic Encyclopedia, Beaton was very much involved in diplomatic events throughout the reigns of James V and Mary, Queen of Scots:

His first ecclesiastical preferment was to the rectories of Campsie and Cambushing, to which he was presented by his uncle, the Archbishop of Glasgow, and when the latter was translated to the primatial see in 1522, he resigned to his nephew the commendatory Abbacy of Arbroath, obtaining for him from Pope Adrian IV a dispensation from wearing the monastic habit. Beaton returned from France in 1525, took his seat in Parliament as Abbot of Arbroath, and was soon created by the young king Lord Privy Seal, in succession to Bishop Crichton of Dunkeld. James dispatched him to Paris in 1533, with Sir Thomas Erskine, in order to renew the Scottish alliance with Francis I, and to negotiate for the marriage of James with Magdalen, only daughter of the French king. Beaton was present at the marriage of the royal pair at Notre-Dame on 1 January, 1537, and returned with them to Scotland in May; but the young queen died of consumption two months later. We next find Beaton on a mission in England, negotiating about certain difficulties which had arisen on the Border. The Queen-Mother (Margaret) wrote specially commending the Abbot of Arbroath to her brother, Henry VIII, mentioning that he was "gret wyth the Kyng" (of Scots). A few months later he was again in Paris, arranging for the marriage of his widowed king with Mary of Guise. After the ceremony (by proxy) in the French capital, Beaton conducted the bride to Scotland, assisted at the solemnization of the marriage in St. Andrews Cathedral, and was afterwards sponsor (together with the Archbishop of Glasgow) to the first child that was born of the union. His elevation to the episcopate took place during this second embassy to the French court. King Francis nominated him to the Bishopric of Mirepoix (a suffragan see of Toulouse, with an annual revenue of 10,000 livres), and he received the papal confirmation on 5 December, 1537. Two months later he assisted at the coronation of James and Mary at Holyrood, himself crowning the queen.

Cardinal Beaton urged resistance to Henry VIII's attempts to sway King James V--Henry wanted James to follow his lead in usurping ecclesiastical authority and breaking away from the Catholic Church and the Papacy. Henry especially urged James to suppress the monasteries and take all their wealth:

His intrigues being baffled, Henry had recourse to force; and hostilities broke out between the two kingdoms in 1542. The Scotch, successful in the first engagement, were hopelessly defeated by the English forces on Solway Moss, and James died broken-hearted at Falkland soon afterwards, leaving a daughter (Mary) a week old, to inherit the crown. Beaton produced a document in which he, with three nobles, was appointed regent by the late monarch's will; but the nobles assembled in Edinburgh refused to act on this, declared the Earl of Arran (heir- presumptive to the throne) regent during the queen's minority, and imprisoned the cardinal on a false charge of conspiring with the Duke of Guise against Arran's authority. Henry now commenced negotiations with the Scottish regent and Parliament with the object of arranging a marriage between the infant queen and his own heir (afterwards Edward VI), of getting the Scottish fortresses and the government of the country committed into his hands, and the person of Mary entrusted to his custody. Arran and the Parliament agreed to the project of marriage, but were resolute against the rest of Henry's schemes. Meanwhile the unjust imprisonment of the cardinal-primate had been followed by the proclamation of an interdict throughout the kingdom; and so deep was the feeling aroused among the still Catholic people by the closing of the churches and the suspension of the sacraments that it was thought prudent at once to release Beaton. The undaunted primate instantly summoned the bishops and clergy to St. Andrews; and the assembly, fully alive to that imminent danger (menacing both Church and State) of Henry's insolent demands, spontaneously voted a large sum, taxed on their own benefices, in defence of the national rights. Beaton by his patriotic ardour awakened similar sentiments in the people at large; the person of the baby queen was safeguarded, and a number of the nobles, including the regent himself (who about this time abjured the new doctrines and submitted to the Catholic Church), abandoned their unnatural alliance with the enemies of Scotland, and ranged themselves on the cardinal's side.

Cardinal Beaton was therefore an enemy to Henry VIII, who attempted to have him assassinated through the efforts of George Wishart, whom Beaton had put on trial for heresy in March, 1546--Wishart was found guilty of heresy, having denied the Real Presence, the Sacrament of Confession, and free will. He was strangled and then burned at the stake on March 28, 1546. Norman Leslie,Master of Rothes, with his uncle John Leslie, Kirkaldy of Grange, and James Melville murdered the Cardinal two months and a day later. The Catholic Encyclopedia article denies it, but other reports indicate that Beaton had a mistress, Marion Ogilvy, with whom he had several children. He served more as a statesman than as a priest--he was Chancellor of Scotland when murdered--and he requested a dispensation from Pope Paul III from attending the Council of Trent because of his work in Scotland.
Posted by Stephanie A. Mann at 12:00 AM