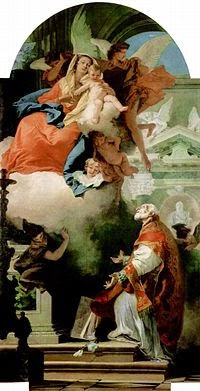 Today is the feast of St. Philip Neri, Blessed John Henry Newman's patron and model. Newman composed a novena of reflections and prayers. On the fifth day of the novena he noted St. Philip's tenderness and compassion:

Philip could not endure the very sight of suffering; and though he abhorred riches, he always wished to have money to give in alms.

He could not bear to see children scantily clothed, and did all he could to get new clothes for them.

Oppressed and suffering innocence troubled him especially; when a Roman gentleman was falsely accused of having been the death of a man, and was imprisoned, he went so far as to put his cause before the Pope, and obtained his liberation.

A priest was accused by some powerful persons, and was likely to suffer in consequence. Philip took up his cause with such warmth that he established his innocence before the public.

Another time, hearing of some gypsies who had been unjustly condemned to hard labour, he went to the Pope, and procured their freedom. His love of justice was as great as his tenderness and compassion.

Soon after he became a Priest there was a severe famine in Rome, and six loaves were sent to him as a present. Knowing that there was in the same house a poor foreigner suffering from want of food, he gave them all to him, and had for the first day nothing but olives to eat.

Philip had a special tenderness towards artisans, and those who had a difficulty of selling their goods. There were two watchmakers, skillful artists, but old and burdened with large families. He gave them a large order for watches, and contrived to sell them among his friends.

His zeal and liberality specially shone forth towards poor girls. He provided for them when they had no other means of provision. He found marriage dowries for some of them; to others he gave what was sufficient to gain their admittance into convents.

He was particularly good to prisoners, to whom he sent money several times in the week.

He set no limits to his affection for the shrinking and bashful poor, and was more liberal in his alms towards them.

Poor students were another object of his special compassion; he provided them not only with food and clothing, but also with books for their studies. To aid one of them he sold all his own books.

He felt most keenly any kindness done to him, so that one of his friends said: "You could not make Philip a present without receiving another from him of double value."

He was very tender towards brute animals. Seeing someone put his foot on a lizard, he cried out, "Cruel fellow! what has that poor animal done to you?"

Seeing a butcher wound a dog with one of his knives, he could not contain himself, and had great difficulty in keeping himself cool.

He could not bear the slightest cruelty to be shown to brute animals under any pretext whatever. If a bird came into the room, he would have the window opened that it might not be caught.
Prayer

Philip, my glorious Advocate, teach me to look at all I see around me after thy pattern as the creatures of God. Let me never forget that the same God who made me made the whole world, and all men and all animals that are in it. Gain me the grace to love all God's works for God's sake, and all men for the sake of my Lord and Saviour who has redeemed them by the Cross. And especially let me be tender and compassionate and loving towards all Christians, as my brethren in grace. And do thou, who on earth was so tender to all, be especially tender to us, and feel for us, bear with us in all our troubles, and gain for us from God, with whom thou dwellest in beatific light, all the aids necessary for bringing us safely to Him and to thee.
Posted by Stephanie A. Mann at 1:00 AM